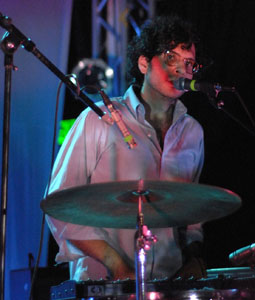 Why? is an interesting act. Everything about them is seemingly rooted in opposites. Their sound is equally rooted in rap as it is indie.

Frontman Jonathan “Yoni” Wolf’s lyrics are both vulgar and ironic, while managing to be honest and intellectual. With the release of this year’s Alopecia, Why? manages to create a unique sound and aesthetic.

Playing primarily new songs, Why? beautifully recreated all the quirky sounds that are present on the record. With a band that’s heavily invested in verbal prowess, the dialogue with the audience was critical to their performance.

Both the sarcasm and the music entertained a packed crowd and made it difficult to walk away when the show was over.