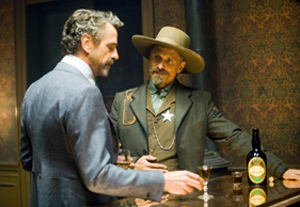 Ed Harris wrote, directed and stars alongside Viggo Mortensen in Appaloosa, a western about two friends hired to police a small town being terrorized by a rancher (Jeremy Irons, with a confounding American accent). Their job, and their friendship, is complicated by the arrival of a young widow (squishy faced Renée Zellweger).

Appaloosa is Harris’ first directorial effort since his Oscar-nominated debut, 2000’s Pollock. Shot with minimal bluntness, the screen is as boring and bare as a tumbleweed. Harris, a brilliant actor in his own right, surrounds himself with a superlative cast, but even Mortensen and Irons look like they’re starring in a high school production of a western. Though Appaloosa’s Academy Award pedigree is impeccable, the final product is misguided.

Appaloosa is currently in select theaters.