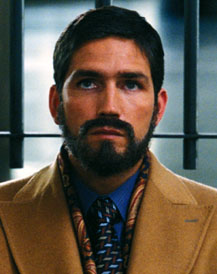 “The premise comes with the whole package,” says actor Jim Caviezel, explaining what intrigued him about his latest role in the noir sci-fi drama The Final Cut, currently in theaters. “Sure [my] character was interesting, but I’ve turned down interesting stories [before] because the story wasn’t there, the way I like it.”

There is definitely a dark, mind-bender of a story at the forefront of Cut, from writer/director Omar Naim. The film begins in the not-too-distant future when it becomes fashionable to have Zoë-brand microchips implanted into your brain. These microchips allow everything that happens in your life – recorded through your eyes as cameras – to be truncated by a “cutter” into a smaller montage of happy moments called a “rememory.” At the end of your life, this mini-film is then viewed by family and friends at your memorial service.

In the film, Robin Williams plays the “cutter,” or editor, who goes by the name of Alan Hakman. Caviezel plays Fletcher, a disgruntled editor who has left the corporate fold and now wants to obtain the footage from Hakman’s latest client for his own purposes. According to Naim, the subject matter of the film affected him differently than it did Caviezel.

“It scared me because it’s a very subjective film. Everything’s seen through Alan’s eyes – it’s become scarier now that I’ve detached from it a little bit,” he admits. “I never really thought of it as something that would really happen because, metaphorically, it resembles the way life is now anyway – so it’s not that far off.”

The Final Cut is Naim’s feature-length directorial debut. Although he penned a screenplay that was eventually put into production, Naim contends that as a “no name” in Hollywood, getting the green light from a studio to direct the film was a feat in its own right. A deal was finally cut with studio execs which, at the outset, led to Naim being able to collaborate with a couple of his idols.

“I had the chutzpah to believe that I could convince people to do this,” says Naim with a self-deprecating grin. “After Robin [Williams] was interested and things seemed like they were moving along, it was time to pick the crew. First I made a list of cinematographers who were available and at the bottom, I went, ‘Here are my heroes.’

“The first one was Tak Fujimoto (director of photography on films including The Silence of the Lambs and The Sixth Sense). [He] was the first cinematographer’s name that I knew because it sticks out [on credits] – I learned his name when I was 13!”

With Williams and Fujimoto in place, it was clear that Naim’s belief in his project was proving infectious. Even Caviezel – who most recently starred as Jesus in Mel Gibson’s hotly controversial The Passion of the Christ – admitted an admiration for the young director’s writing talents and conceptual eye.

“I liked the character. I enjoy playing [emotionally] real characters that have a [back-story] – the story itself. People say, ‘It’s so dark. Why did you do it?’ And I say, ‘Yeah, but the truth still comes through,’” emphasizes the soft-spoken Caviezel. “Omar has the wisdom at a young age to see that. When I knew Omar wrote [The Final Cut], I was really excited about doing it. I wanted him to direct it. I said, ‘He has to direct this. This is too difficult for anyone else [to conceptualize from a screenplay].’”

In addition to a somber visual texture, The Final Cut explores even darker moral themes, such as the application of technologies in our everyday lives and the fact that even the simplest things in this realm can be taken too far.

“The end doesn’t justify the means when we have the technology,” says Caviezel, sharing his perspective on this film’s message. “We think, ‘Ah, this is great, this is going to benefit us.’ But we [also] have to look at how [technology] can hurt us.”