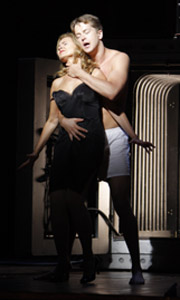 The LA Opera has begun its 2008/09 season on a most ambitious note. Artistic Director Plácido Domingo shows uncommon boldness in allowing three film directors to take a shot at opera for the first time in their careers.

The season opened with an adaptation of David Cronenberg’s film The Fly, about an obsessed scientist with an invention that “will change the world as we know it.” Composer Howard Shore does an admirable job of straining some human emotion from such an unsentimental story. Still, it is difficult to take seriously the story of a man turning into an insect.

While the opera version is very different from the film, some of the finer moments have been kept. By virtue of its weirdness, the show is oddly watchable, yet soaring moments of musical rapture are notably absent.

Il Trittico, on the other hand, is a triumph in every respect. Three operettas from the legendary Italian composer Giacomo Puccini performed in succession will satiate any classical music lover. The pieces were originally intended to be performed together and opened as such at the Metropolitan Opera in New York in 1918. They are rarely done together, however, and that’s part of what makes this evening special.

Filmmaker William Friedkin takes on the first two pieces, “Il Tabarro” and “Suor Angelica.” The first is set on the banks of the Seine in Paris and tells the story of forbidden love among the lower class. In “Suor Angelica,” we are transported to a hillside convent where over 40 nuns dressed in purple and white grace the stage and steal our breath with angelic voices.

Woody Allen directs the closing piece, “Gianni Schicchi.” The story involves a family pretending to mourn the loss of a wealthy uncle that’s thrown into a fit when they learn the deceased has left his money to a monastery. Allen’s sense of humor is felt everywhere. It’s a veritable laugh-riot, yet still makes room for the exquisite music.