The Oly Girls: Double the Trouble 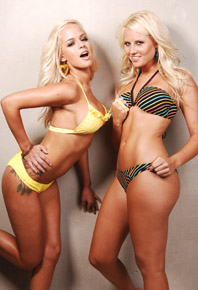 “Sunset Tan” revolves around the California-based tanning salon chain. Viewers get an inside look at what is described by the hype as, “L.A.’s most successful upscale tanning salon.” But beware, young entrepreneurs, if you’re looking for a work-oriented show, keep looking.

This is merely a “reality” show where staffers’ and clients’ ridiculous, sometimes over-the-top dramas take center stage. “Sunset Tan” draws viewers into the lives of these catty, flirty and ambitious young people, and nobody does it better than the Olly girls.

Holly Huddleston and Molly Shea were just a couple of 22-year olds working as promoters for the L.A. tanning salon when E! walked in and wanted to start a television show.

“Molly and I went to the Christmas party, and they loved us,” Huddleston says. “They thought we were crazy.”

The bubbly blonde girl duo loves the spotlight and will do just about anything to cause drama in the salon. They were famously fired (and re-hired) after throwing a party in their boss’ home while he was away on business.

“Sunset Tan” makes bank when the cameras zoom in on poolside streaking sessions and double G implants, but the Olly girls say the show is all about “over exaggeration.”

“The show is real. We play around, we have fun and we act stupid,” Shea says. “It’s a tanning job … how serious can you take it?”

With its unquestioned focus on physical looks and dysfunctional professional behavior, “Sunset Tan” is clearly intended to be a guilty pleasure for adults. Like any show, it has its fair share of fans and harsh critics alike.

“There is always going to be a negative stigma attached to us [because of the show],” Huddleston says. “People think we’re dumb, blonde bimbos.”

Before Season Two, the girls had a sports commentary show on Kush TV that caught the eyes of oversexed teenage boys. They were also dubbed as two of the hottest girls on the Web by Maxim.com.

Six Things You Didn’t Know About the Olly Girls:

Molly: Depends on the day.

Holly: My parents. They are both amazing people, and I wouldn’t be as humble and grounded as I am today without them.

Molly: Even though I’m not following in my parents’ footsteps, I look up to them.

Holly: When I was younger I played volleyball and softball.

Molly: I can ride a bicycle and love puzzles.

Holly: Being lazy … I don’t like to cook or clean.

Holly: Any vacation is good.

Molly: The South of France.