Alternative Transportation: How to Get Around Without Making Mother Earth Cry 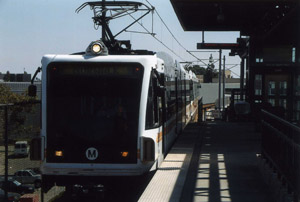 If the war on terror and global warming-induced hurricanes pummeling the Gulf Coast have brought this semester’s daily grind to a screeching halt, there are plenty of ways to get around town without punishing the Earth – or, at least, your student bank account. We’ve compiled this overly obsessive, jam-packed list of alternative transportation information so you’ll never have to sit in traffic again (or at least not have to pay as much for it).

So sell your car and splurge on a vintage motorcycle. Or keep your car and treat it to some cheaper gas. Better yet, find a local fixed gear ride and merge on in because whether you’re into bicycles, subways or good old-fashioned money saving, there’s no excuse to hurt Mother Nature when she’s given you the tools to say you’re sorry.

Remember being a kid, riding around after a hard day of elementary school with neon metallic tassels spewing out of your glitter-gel handlebars and those fat white tires getting dirty on the suburban pavement? Ahh – the bicycle. Two wheels and some leg brawn never got you so far, but these days, it’s a lot more than just rounding up the kids to play tag.

While skateboards and rollerblades force you to ride over the cracks that may or may not break your mother’s back, bikes free you from unending sidewalks and turn your former training wheels into a legitimate vehicle, putting you on the blacktop where you get to laugh at cars stuck in traffic and be a part of the burgeoning L.A. bicycle scene.

Thanks, in part, to rising gas prices – and the realization that our city isn’t really that spread out if you’re OK with some exercise – bikes of all types are becoming more accessible.

Both on-campus and off, beach cruisers and mountain bikes are spilling out of racks; but the eco-surge in a city whose useful areas are as flat as an ironing board has been especially kind to road bikes – you know, the ones with the thin tires – spawning riding communities and co-ops that are connecting enthusiasts from across the county.

Fixed gear bicycles – a.k.a. only one gear, no coasting abilities and, usually, no brakes – have created a beast of their own with specialty shops like L.A. Brakeless (3314 Motor Ave., Los Angeles) creating custom rideable works of art and tons of weekly rides to keep the most colorful of advocacy cultures pedaling.

Like Critical Mass, a monthly quasi-protest event held in cities around the world. Originally, the idea was to “take back” the streets from motorists, but that aggression has morphed the ride into basic cyclist-awareness (and it’s a great way to make sure you earn your beer at the finish line). Critical Mass meets at the Wilshire/Western Red Line Station on the last Friday of each month.

If you want to get started on your bike-venture but don’t know where to go, Los Angeles-based C.I.C.L.E. (Cyclists Inciting Change through Live Exchange) is a great beginners source with national cycling-related news and links to everything you could possibly want to know about safety classes, back-road directions and tips on buying your first bike. There’s even a “Beginners Tips and Resources” section compiled especially for the clueless.

The Europeans had it right 60 years ago, throwing helper motors on their rear hubs to raise the speed – and gas-saving potential – of bicycles everywhere. After the MOtor and PEDal combination portmanteau’d – and the design underwent some aesthetic treatments – the under-50cc beasts hit their peak in the United States during the Nixon Era. Thankfully, there are a ton of Puch, Motobecane and Tomos relics leftover from the ’70s, and mopeds are making a comeback.

To clarify, Vespas are not mopeds, mopeds are not scooters and scooters are not Razors; so, even though the terms “moped” and “scooter” are often lumped together, they are not interchangeable.

Scooters come in electric or gas-powered models and usually start with the insertion of a key and the simple press of a button. They don’t have pedals, their tiny engine is hidden by cover-all bodywork and they are, generally, a smoother ride. Floorboards are an onsight giveaway and storage under the seat is not unlikely.

Mopeds, on the other hand, are a raw Brundlefly of money-saving technology where some hard pedaling kick starts the motor compression, and, if worst comes to worst, you can ride it home like the clunky half-bike it is. Tomos is one of the only companies still producing a modern line of legitimate mopeds, but the wait list is heinous and fixing up the greasy, older models is half the fun.

Speeds for both mopeds and scooters range from 20 to 40 mph and most can go more than 100 miles on a premium gas fill-up of their one-gallon tanks. So while you can’t hit up the 405’s carpool lane, you’ll still be going faster than half the people on Sunset Boulevard during rush hour at a fraction of the cost.

Since they’re not quite bikes and not yet motorcycles, the repair niche is small – for the older models, parts are almost exclusively traded online – but enthusiasts have built a close-knit community around scene staple Choke in Silver Lake (4157 Normal Ave.), a two year-old operation run by a 20-something former Vespa employee.

With a 1950s service station vibe and vintage floral couches for infinite lounging, Choke is the home to fixed up classic minis, sound maintenance advice and the best espresso this side of the Puget Sound (owner Jeff Johnsen obsessively changes the grind in accordance with the barometric pressure at the time you order).

As the unofficial base camp for Los Angeles’ Moped Army gang, the Latebirds, Virgil Village’s Choke hosts Tuesday night rides around town, longer monthly rides through the hills and an annual rally where gangs from around the country show up to support the scene.

Although specific DMV rules vary from state to state, in order to get started, California only requires you pay a one-time $18 registration fee and obtain a class M1 license (which is like a normal motorcycle license without having to take the $250 weekend safety course). Between old school nostalgia and new school oil prices lies the appeal of small–motored machines: no insurance necessary.

For those of you unaware of our sprawling city’s connective tissues, Los Angeles has an underground subway. Granted, it’s not much compared to New York’s intricate 26-line, 422-station system, but with the increased demand for public transit, Los Angeles’ Metropolitan Transit Authority – more affectionately known as Metro – is trying to let Angelenos know that, yes, the subway is practical and, no, it’s not scary. To prove it, they’re stepping up with expanded service and a snazzy new marketing campaign.

Now that gas prices are oozing into the ridiculous zone, Metro planners are in hyper-drive, throwing signature Rapid buses on any major street that will have them and expanding the rail system faster than imminent domain can say, “move.”

And with all their recent enhancements – like onboard Spanish-televised news and elevators that don’t smell like human excrement – Metro has taken away all of the previous excuses not to use public transportation by doing the impossible: making one of the most spread out urban areas accessible to anyone with a dollar and a quarter.

The rainbow of revamped railroads – red, purple, blue, green and gold lines – that currently stretch all the way from Long Beach to Pasadena to LAX and back to the western edge of the San Fernando Valley, run on restored parts of what used to be one of the most expansive railroad system in the country. With bike lockers at some stations, free park and ride lots at the rest, online pass-purchasing and a rider’s guide available in 10 languages, Metro has answered everyone’s getting-there prayers. They even have an easy-to-use online trip planner and a toll-free number you can call if you get lost along the way.

As for us, student ID cards are obtainable at any of four spread-out Metro Customer Centers and are affordable, even on a Top Ramen budget.

For inter-county travel, Metrolink, as the commuter-rail lovechild of five greater Los Angeles transit authorities, is the logical method. Through the combined efforts of four surrounding counties, discounted trains run on traditional railroad tracks from South Orange County all the way out to Oxnard, grabbing travelers at actual train stations along the way.

Through electric trains and clean air-burning buses, Los Angeles’ new and improved public transportation boasts an expansive, eco-friendly system for a city that needs it most.

If, for some reason – and it better be good! – you absolutely, positively, no doubt about it need a car to get around, there are a few ways to pull the cost-benefit ratio in your favor.

Zipcar is a revolutionary program that – once you’re a member – allows you to reserve a car, unlock it with the swipe of a card and use it at your discretion until your time is up (“easier than using an ATM,” their Web site brags). They have hundreds of hybrid and high gas mileage cars situated around the city, so whether you need to drag your dirty clothes to the laundromat or take your grandma out to dinner for her birthday, there’s always a Zipcar to provide a stress-free way to have your cake and eat it, too.

Or, instead of renting a car, you can just buy one that the environment doesn’t need to know exists! Biodiesel engines are easy to convert and with mostly-free fuel and a 99 percent reduction in toxic emissions are the best of both worlds.

Silver Lake’s Lovecraft Biofuels (4000 Sunset Blvd., Los Angeles) does cheap conversions on any diesel car and sends you off with a starter kit full of answers to questions like “How do I filter waste vegetable oil?” (let it settle then pour through a cloth) and “What is the MPG after conversion?” (the same as before). After Lovecraft gets its hands on it, a converted 1984 Mercedes will run on vegetable oil from the grocery store, waste oil – which can be sketchily retrieved during night runs through Chinese restaurant grease bins – and regular diesel fuel, so you’ll never run out of cheap ways to stop acid rain.

If you’re still buying regular gas – and haven’t run out of tears – there are a few sites to help ease the pain in your wallet. LosAngelesGasPrices.com is the easiest to navigate, compiling user-submitted reports and listing the cheapest stations in the county along with company-and area-specific trend information. Submit cheap prices you find during your travels with their easy front-page form or have already-submitted prices sent to your cell phone for up-to-the-minute money saving.

The easiest way to do your part without messing up your routine (or overhauling your baby’s engine) is to carpool. Caltrans has been kind enough to expand our freeways’ High Occupancy Vehicle (HOV) lanes to make a network of elevated straight-aways and roller coaster-esque interchanges specifically for those willing to share their ride.

Metro runs a carpooling program that connects commuters with similar destinations, but the easiest way to have a non-awkward trip to school is to put the word out to your classmates. Most schools sell discounted parking passes and reserve primo spots for carpoolers, and there are park and rides sprawled out all over the city, so if you can’t ride a bike and are still afraid of public transit, at least take someone in the car with you. They’ll probably thank you, and the Earth will, too.