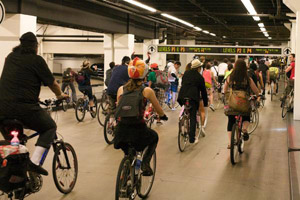 As the sun set on Sept. 22, summer was officially over. For us college kids who had already been slaving away rushing to classes, cranking out essays, cracking open books and easing our way back into the world of academia since early August, summer may have already felt long gone.

But as the equinox makes it official and the steaming hot summer sun begins to cool, one realizes it’s fall – the season of crisp, cool evenings, crunched leaves on the pavement and Halloween debauchery. Yes, that’s right, it’s almost October already.

If it makes your eyes tear up a little and your anxiety peak up a ton, then you know how important finding some sort of release is to balance your packed schedule with a little fun. “Work hard, play hard,” right? I’ve got just the idea for you.

This summer I experienced my first social bike ride – a circus party of around 300 hooting, hollering, costumed and intoxicated bike riders racing through the city like insane outlaws on wheels. The ride was called C.R.A.N.K Mob, and it was one of the highlights of my summer.

Feeling the wind blow through your hair and refresh your face; participating in the close camaraderie of complete strangers who have become united by the chaos of the ride; experiencing the endorphin-pumped exhilaration of the pace – there’s only a few ways to kill stress that are more exciting. But if partying on wheels isn’t your thing, there are dozens of tamer rides to try, too. Here are a few crazy and not-so-crazy rides to consider:

This band of merry hipsters meets at the Eagle Bar in Eagle Rock (4219 Santa Monica Blvd.) at 7:30 p.m. on the second and fourth Wednesday of every month. The diverse crowd is filled with enthusiastic riders, funkdafied freaks, artists and everything in between. It’s much tamer than C.R.A.N.K Mob and a bit shorter, so if you’re too intimidated to jump in with the mob, give this one a whirl.

The ride, which is described on their Web site as “a monthly bike ride dance party masquerade carnival sextravaganza” lives up to its hype. With hundreds of bikers crowding major streets, their red taillights flickering like a sea of stars before you, this ride is almost magical.

The mob rides for several miles before stopping at an empty parking lot where the party begins. A bike-pulled DJ stand pumps out beats, the smell of marijuana wafts in the air, beers are snapped open and dancing ensues. Jump ropes and bike jousting provide extra entertainment.

The ride lasts for around 20 miles from 10 p.m. until dawn, cruising through West L.A., Culver City, Marina del Rey, Venice Beach and West Hollywood. It’s on the first Saturday after the third Friday of each month. Riders meet at the big red brick building on Sawtelle Boulevard and La Grange Avenue in West L.A. For more information, visit crankmob.com.

An easy-paced ride, the Pasadena Critical Mass daytime ride is more about cruisin’ in a beautiful setting while advocating the rights of bicycles on the streets in Pasadena. It lasts only an hour and 45 minutes and generally ends with a picnic in a park. It’s a great sunny fall day activity and leaves your nights open. The ride meets on the third Saturday of every month at 10 a.m. at Memorial Park in Pasadena (near the Memorial Park Gold Line Station).

Organized by the Southern California Institute of Architecture (SCI-Arc), this theme ride is part architectural tour and part urban anthropology. “RIDE-Arc rides are known for providing a unique mix of having fun while riding your bicycle and an adventure in discovering fascinating aspects of the Los Angeles area,” relays the Web site. Its laid back vibe is awesome for those looking for less insanity, but just as much fun.

The ride meets on the first Friday of every month, meeting at various locations and featuring different themes each month. For more information, visit ridearc.org.

Warning: this ride is possibly the most intense, fast-paced group ride in the pack. Lasting around 40 miles, this ride is meant to physically destroy you as you ride as fast as humanely possible.

According to the site, “all are invited, but not all will make it to the end.” The goal is to push yourself, challenge the pack and feel accomplished and exhilarated by the end. The ride rolls out every Monday from Tang’s Donut on Sunset Boulevard and Fountain Avenue (4341 W. Sunset Blvd.) in Silver Lake at 10 p.m. For more information, visit wolfpackhustle.com.