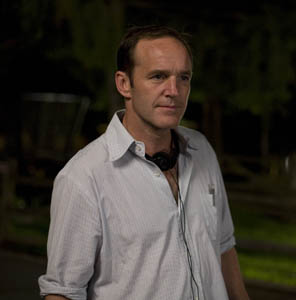 Sex addiction, self-inflicted asphyxiation, Alzheimer’s, colonial reenactments … welcome back to the world of Chuck Palahniuk. Nine years after Fight Club sparked a rabid cult following with its nihilistically perverse sexiness, Palahniuk’s Choke makes its way to the big screen starring Sam Rockwell as Victor Mancini, a sex addict who supports his Alzheimer’s-stricken mother by working as a colonial re-enactor and spends his evenings deliberately choking on food in ritzy restaurants to entice wealthy patrons to come to his rescue with both the Heimlich Maneuver and subsequent financial aid.

First-time director Clark Gregg, a founding member of the Atlantic Theater Company with William H. Macy and Felicity Huffman, also adapted the novel for the screen.

“I always wanted to do an incredibly faithful adaptation of the book,” Gregg says. “For me the process of reading a book or watching a movie or a play is, you’re watching a dream. At a certain point you care because it becomes your dream and you’re taking part in it.”

Although, he still feels like he didn’t quite do the original material justice.

“I deserve a beat down for the number of great lines that are not in the movie,” Gregg says.

Rockwell often decided to add in ones he felt particularly passionate about.

“[Sam] was listening to the book on tape on an endless loop, over and over. Later, when I watched dailies, I realized his improvs contained his favorite lines in the book,” Gregg says.

As a writer and actor with an extensive list of stage and screen credits, Gregg’s first endeavor as a director can be summed up in one word: terrifying.

“I think it’s a little bit like losing your virginity,” Gregg offers. “I’d been around and I’d heard a few things, but nothing is preparing you for what that’s going to be like. I remember the first time I French kissed a girl in eighth grade. I just remember thinking, ‘Oh God. I just know I’m supposed to be doing something with my tongue. I should’ve asked somebody because I’ve got no idea what to do with my tongue now!’ After a while you think, ‘She doesn’t really have a particular pattern going on here. If I just avoid the braces, I’m in good shape.’ It’s a pretty apt description.”

“Directing and acting in plays, you learn hard and quick what people care about watching, that and all the TV shows and movies I’d done over the years. I learned much more than I thought I did,” Gregg says. “I knew what I didn’t want to do. Nothing really prepares you, but you certainly go in armed with more than you thought. I had learned enough not to come off like I knew everything and not to be afraid to go, ‘I have no idea what you guys are talking about right now, so we’re going to have to stop the train and have you explain it to me for a few minutes.’”

For Rockwell, he loved working with a first-time director on a project that was so potentially controversial.

Not that it was all work and no play tackling a story so rife with unmentionable topics. With a mischievous glint and a smirk, Rockwell says, “Taboos are always fun.”