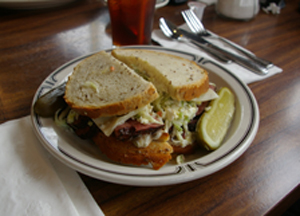 Did you know Los Angeles has the second largest Jewish population in the United States? So what happens when you put 519,000 Jews in one city? They cook!

No need for a costly plane ticket. Allow us to take you on a culinary tour of Kosher Los Angeles with nine restaurants that will turn your table into a Wailing Wall as you weep with gratitude for the scrumptiousness. Regardless of where you dine, be prepared for the first bite, these places are disarmingly delicious! If food could solve world conflict, the Middle East would be at peace thanks to these good eats.

Nestled in downtown’s fashion district, Bar-B-Kosher has become a smash success since opening in 2006. The name, mixed with the faux wood paneling that covers every inch of the space, may be kitschy but Bar-B-Kosher comes to play.

Seating is limited, and there’s rarely an available table, so you might want to consider a to-go order. Best on the menu: the Tunisian (an Israeli version of spicy tuna nicoise) and the Mix (turkey, chicken and caramelized onions in a creamy, curry like sauce).

All sandwiches are served on a home baked baguette with a spicy pickled cabbage. The wall to ceiling “wood” wallpaper may feel a little claustrophobic, but your meal will send you flying to the heavens and back.

Be prepared when you enter Café Eilat; that pastry case will suck you in! An outstanding bakery and gourmet coffee shop, you could easily grab an excellent Elitaccino coffee and a pastry and be out the door.

But then you would miss out on their “World Famous” Shakshaka; eggs, tomatoes, fire roasted peppers and onions coming together like Voltron in your mouth, or the best Portobello Mushroom sandwich I’ve ever had, topped with caramelized endive, oven dried tomatoes and basil garlic aioli.

After devouring a plate of their Belgian Fries or homemade hummus four ways (classic, mixed olive, pesto and roasted pepper), allow the desserts to beckon you – they’re as good as they look and smell. You know you saved room.

You know you’re good when you have three locations within six miles of each other. Fish Grill has recently grown into a mini-empire, all serving grilled fish that is “simply the freshest,” the restaurant’s mantra.

Ahi tuna, trout, salmon and sea bass are grilled over mesquite coals, simply and deliciously, and served with sides that include absolutely exquisite skinny, crispy, hand cut fries. A baked potato, cole slaw or salad can be substituted, but passing up these delectable taters, which are best doused in ketchup, hot sauce and the vinegar resting on your table before being dunked into Fish Grill’s homemade tartar sauce, is a crime.

It’s a simple concoction really: pastrami, Swiss cheese, cole slaw and Russian style dressing. What makes it worth the asking price is the fact that the pastrami used is the best damn pastrami on the West Coast.

It’s the Tupac of sandwich meats and can only be challenged by a select few New York and Brooklyn rivals. Sure, Langer’s offers other delicious sandwiches and sides, but if you’re going to do it, do it right. Pastrami all the way, baby!

When most people think “kosher” they don’t think of Eggplant Parmigiana, but that’s one of the mouth watering specialties at Milk N’ Honey, Los Angeles’ only upscale, kosher Italian restaurant. When Israel joins forces with Italy, a surprising and delicious lovechild is born.

Plus, after a meal of Gnocci Alla Bava or Fettuccini Con Pesce, you can still enjoy a classic Jewish dessert; cheese blintzes. It’s the best of both worlds.

For more than 25 years, Leah Adler has been serving some of the best blintzes and latkes in the city, yet that tends to get overshadowed by the fact that they’re the same ones she makes for her son; a gentleman by the name of Steven Spielberg.

The Milky Way is a space that is homey and inviting, just like the food. Leah’s latkes are E.T.-style other worldly. Served with sour cream and chunky, homemade cinnamon sugar apples rather than boring, runny applesauce, her latkes arrive crispy and gleaming on the outside, moist and thrilling on the inside.

The blintzes are just as rapturous – light, fluffy, scented with vanilla and almond. They’re as big as a knish and thoroughly addictive. We want Leah to be our mommy too so we could eat them every day, all day.

With vegan options like the vegeroni pie (vegan pepperoni) and the diabolically delectable garlic slice (fresh chopped garlic piled on piping hot pizza that requires major Tic Tac action but is well worth the stink), not only does Nagila Pizza bake a damn fine pizza, they knock out what might very well be the best falafel in Los Angeles.

Prepared before your eyes, Nagila’s perfectly spiced, fried chickpea mixture will help you understand why they named this place Nagila, which means rejoice; these falafels deserve a parade! We recommend you order one with the Israeli chopped salad (cucumber, tomatoes, onions) and throw a little of their homemade hot sauce on top. Don’t be ashamed to do the horah in its honor.

Hey, you! Yeah, the one walking into Jerry’s for their blasphemous, wretched matzo ball soup. Get outta there.

If you want the real deal, you need to head to Nate ’n Al, a L.A. institution since its founding in 1945. For classic kosher deli delights, this is Mecca.

After more than six decades catering to everyone from goyish starlets to finicky but devoted diners, Nate ’n Al has perfected all the classics. Chopped liver, Reuben sandwiches, whitefish salad, knishes; they’re all stellar, and their matzo ball soup was voted the city’s best.

Surprising tricks up Nate ’n Al’s sleeve: Their blueberry pancakes are divine and bursting with plump, ripe berries, and Tortilla Brei, their own invention, is a surprisingly enjoyable and potent combination of Mexico meets the Aunt Ida on a plate.

What began as a nickel hot dog stand in Coney Island in 1916 is now a legendary institution with locations as far flung as Egypt, Kuwait and Japan. Where else can you find fast food for the Jew in you? One of the world’s only kosher fast-food joints, Nathan’s offers delicious greasy grub to satisfy your crappetite.

Crispy chicken sandwiches and Jalapeño burgers are served up alongside Nathan’s legendary hot dogs. See how many you can down in one sitting.

The current record in Nathan’s Famous Annual Fourth of July International Hot Dog Eating Contest is 66 dogs in 12 minutes. We dare you.