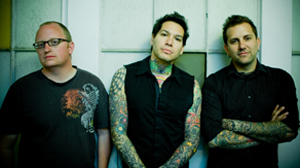 The members of MxPx have seen punk rock go through a lot of changes since they started their band. While lesser groups crumbled under a quickly evolving music industry and even more rapidly shifting listener tastes, vocalist Mike Herrera, drummer Yuri Ruley and guitarist Tom Wisniewski would remain. And though they’re older and wiser with all their experience, the music, and their passion for it, remain a constant throughout the years.

“I’m not trying to talk crap about other bands or anything, but it seems like the whole punk scene has been taken over by a lot of emo and metal,” says Wisniewski of the current trend towards everything darker and tighter. “Straight up fast SoCal punk has kind of gone away, and we want to bring it back and represent it.”

And what better way to do it than by going back to their roots?

The release of last year’s Secret Weapon marked the band’s eighth full-length album, but also a more symbolic return to Tooth & Nail Records, which put out the bands first four albums before they made the major label jump. Having been proverbially there and back now, Wisniewski believes it’s just as well that things happened as they did.

“There’s no reason to go on a major label, especially with the way the label system is,” he says.

While the prospect of being on a major may have at one point been the band’s goalpost to signify success, Wisniewski and his band mates are in a much more comfortable position these days, where they’re no longer dependent on one in order to continue putting out music.

“If anything, we’d just do it on our own,” Wisniewski says of his choice between going back to a major or self-releasing an album.

Wisniewski’s assurance in his band’s position comes from the kind of confidence one has when they really believe in what they’re dong, something he admits he and his band mates had to ask themselves before going in to write and record Secret Weapon.

“The process for Secret Weapon was to get back in and kick it old school style, if you will,” he says with a laugh. “We were just like, ‘Why’d we get into this in the first place? What do we love about paying?’ This album was a bit easier because we were going back to what we’ve always known, the songs just came together.”

For all their experience, however, even Wisniewski admits he’s still surprised sometimes by what his band has achieved and has yet to lose his appreciation for what the band allows him to do now.

“I thought we’d go on tour once or twice, have some fun, make another record and then go out into real life, so it’s awesome to still be able to do this, travel the world and have people sing along as we play,” he says. “Our legacy isn’t going to be chart-topping success and record-smashing tours, it’ll be a legacy to the scene and to bands. Before Everything Sucks, the Descendants’ highest selling record only sold 30,000, but every one of them went out and started a band. That’s kind of cool to have that lasting influence on the scene and that in itself is a great reward.”

Though their particular brand of punk isn’t necessarily the “it” trend of the moment, Wisniewski finds satisfaction in knowing that both longtime fans and recent additions have a more meaningful connection than any buzz band could hope to accomplish.

“It’s always meaningful when someone says, ‘You were my high school experience. When I hear your records, I remember this time in my life.’ It’s a pretty huge compliment,” he says.

Much as they appreciate the degree to which fans have attached to their music over the years, at the core of MxPx’s music, it’s not about the fans, per se. Nor is it about the band members themselves for that matter, or their individual motivations for being musicians.

As Wisniewski says, “We aren’t doing this for the next big thing status, we’re doing it because it’s what we’ve always liked to play.”

Simple, basic and honest: What’s more punk rock than that?