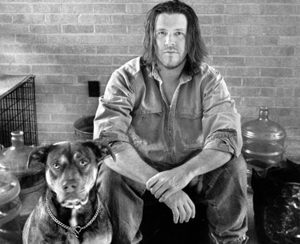 For nearly a year, I left my wall calendar on June 2004 because there, triple-circled, bolded, in the middle of the month faded “David Foster Wallace 1 p.m.,” a constant reminder of the time I met the greatest influence on my writing. Meeting heroes of yours is always a contentious endeavor: more often than not they let you down, ending the anaclitic obsession, tainting the work you hitherto treasured.

Wallace redefined how fiction could be constructed, but writers elsewhere have pontificated on this matter. What I remember of Wallace is the MacArthur “Genius” Grant winner actually listening to a disturbed woman prattle on about POMO literature in a post-ironic age (“Hell hath no fury like a coolly received postmodernist,” Wallace wrote in Girl With Curious Hair), and when a teenager chastised him for using words not found in the dictionary, he shrugged back, “Get a better dictionary.”

And but so, waiting in line for him to sign a copy of Curious Hair, we Wallacites talked about the mysteries of Jest that will never – like Wallace, and the Mad Stork’s, suicide – be adequately solved. The person in front of me told a remarkable story of how his friend had read the 1,079 page book for the blind. “I am so sorry for your friend,” said Wallace.

Now that I reached him, the line I had worked out – the only way you could listen to the book on tape was if you were travelling to Mars – had left my anxious consciousness.

“What about the story of dropping the book in the bathtub?” he smiled, pointing at the warped pages.

He took the book, drew the editing mark for “remove” over his name, signed it and scribbled “To Josh, All Best Wishes, David F Wallace.”

Wherever you are, David, I wish you the same.