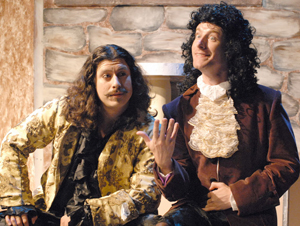 Nagle Jackson struggles to put the comedy in the Commedia dell’Arte with “Molière Plays Paris.” Unfortunately, the playwright has difficulty finding a funny bone, let alone tickling it.

Jackson took two of Molière’s one acts, translated them and added the barest of plot threads to interweave the short plays together. The second act, “The Forced Marriage,” is slightly better than the first, but it’s not Molière’s best work.