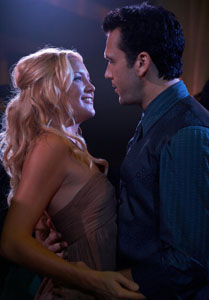 Jason Biggs. Dane Cook. Kate Hudson. These three stars have each made an indelible mark on the comedy world at large.

Biggs showed the viewing public that you can display heart and crude humor, all in the same film, with his breakthrough role in the teen sex comedy, American Pie. Cook has crafted a career around frat humor and reinvention of the three-finger salute, and Hudson is the much sought-after, critically praised daughter of showbiz royalty.

Alone, they’ve got talent. Together, they tear it up in My Best Friend’s Girl.

Hudson stars as Alexis, a ravishing attorney who’s only had two loves in her life. Although she’s dating Dustin (Biggs), she yearns for freedom and excitement, and frankly, it’s not there with her current beau.

After dumping Mr. Goody Two-Shoes, he employs his nightmare cousin Tank (Cook) to come to his rescue. Tank is notorious for being the go-to dude hired by jilted ex-boyfriends to date and then scare women back into their awaiting arms. However, when Tank meets Alexis, sparks fly.

Their onscreen courtship becomes more intense and action-packed than a chopsocky flick. Everything culminates at the wedding of Alexis’ sister. Tank fully unleashes his best material to send his love running in the opposite direction – some of which just might make audiences blush.

“I’m actually teaching a class at the Learning Annex on how to be more like Tank,” jokes Cook about any similarities he might have to his role.

As for Biggs, when asked if he’s really as romantic everyday as his lovelorn character, he takes a shot at Hudson: “Watch this: Her panties are going to come right off.”

Just like in the movie, Hudson rolls her eyes with point-blank comic timing as her co-star explains that his modus operandi is to do the little things to make his new real-life wife, Jenny Mollen, happy.

But the true endorsement for My Best Friend’s Girl does not come at the hands of a film critic and his pen; it’s actually from famed director Howard Deutch, who proudly accepts kudos for what he’s managed to bring to the big screen.

“It’s like when you see a bunch of thoroughbreds at the gate and they can’t wait to get out. And it’s your job just to make sure they stay on track.”

My Best Friend’s Girl is currently in theaters.