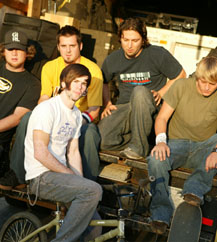 Putting aside the fact that starting a band takes a lot of time and hard work, choosing a name is arguably one of the toughest decisions a band has to make. Deciding upon a name usually takes careful consideration, but when a handful of friends from Baton Rouge, La., played their first gig just two weeks after forming, they had little time to ponder over names for their band.

Based on where they all were in their lives, they decided on Anomaly. At the time, it may have just been a name, but now, two years later, the band embodies everything the word represents.

Trying to describe their music is what the band says is hardest for them to do.

"We really don’t settle on one sound. We like it hard, but we also like to experiment a lot," says singer Zac Woodring. "One of the better ways to explain it is that we are really driven toward our live shows. We are driven toward grabbing someone who has never seen us before and we try to make our music really crowd-oriented."

Although Anomaly’s music has always been geared toward pleasing the crowd, when they first began playing in Baton Rouge the only way for them to get into a venue was to play cover songs.

"We sneaked in by playing covers for the first six months or so, then we gradually started to play our own stuff. People eventually started yelling for our songs rather than [those of] others," Woodring says. "We had one of the biggest followings back home, especially for an original band."

Despite the band’s love for their Southern hometown, the band collectively decided they needed to stretch their horizons in a place with more opportunity.

Two weeks before they were set to leave for Los Angeles, the band’s original bass player decided not go with them. So, minus a bass player, the band moved out to the City of Angels in hopes of finding bigger and better things.

Without a bass player, the band’s first quest in California was to find someone who could fill its empty slot.

"The thing that was important to us was not just finding a good bass player, but [because] we are all best friends we needed someone who would click with us personality-wise. So when we met Ian [Baca] it was like love at first sight," says Paul O’Neil.

"[Losing our original bassist] was a blessing in disguise," he continues. "We were kind of limited with what we could do with our old bass player anyway, so it has been a great thing having Ian in the band."

Although a lot has changed for Anomaly since their move to Southern California, their spirits have consistently remained high. Currently, the band is in the studio recording its first full-length album that promises to be a cohesive, rock-driven record fusing many different sounds and influences.

"What we are doing right now, I don’t think has really been done before … We are using technology that has never been out before," O’Neil says. "It’s pretty complicated so we have to make sure that what we are doing in the studio can be used onstage."

Prior to entering the studio, Anomaly spent two months trying to pick songs for the album.

"In the past, when we have done demos, we have just gone into the studio and we really wouldn’t plan ahead, so this album will definitely be better because of that," Woodring says.

"For the most part I try to stay on the positive side of things as far as the things we have been through since we have been out here," Woodring continues. "On this album you will see a bit more honesty."

Part of Anomaly’s appeal is the fact that they are multi-dimensional and unique which comes across both musically and lyrically.

Despite the fact that Anomaly is still adjusting to life in L.A., their transition only helps fuel the band’s inspiration. As for the future, Anomaly has its hopes set high.

"We always strive for that thing that is untouchable, but somehow we always get there at the last moment," Woodring says.

Anomaly’s full-length album will be out in April. For more information, visit www.anomalyonline.com.