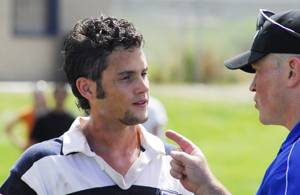 Want to see Penn Badgley (“Gossip Girl”) sporting a weird faux hawk mullet hybrid? If so, Forever Strong is your chance to do just that.

This male-driven ode to angst and redemption stars Hollywood’s newest action phenom, Sean Faris (Never Back Down). As Rick, he finds himself in a mess of trouble when he nearly kills his girlfriend in a drunk driving accident. Soon, he’s shipped off to a juvenile detention center in Utah.

While in the clink, Rick broods for a bit then asserts dominance over some of the other males before being recruited by a local team of his former rivals. His new buddies’ care and molding allow him to not only hone his competitive edge but become a better young man in the process.

Just as things start looking up for this kid, the sudden and tragic loss of a teammate leaves the audience to wonder if this will ultimately help or hurt Rick’s journey along the high road. Or better yet, will his undoing come at the hands of his estranged father/former coach?

Forever Strong is like a Steven Seagal movie; sure, there’s an audience for it, but is it really going to change lives? Probably not.

Faris was much better in Never Back Down. Despite all the drama in the Forever script, he just doesn’t get the chance to show much range. The same can be said for Badgley. Filmmakers also fail to capitalize on his immense charisma, leaving him to flounder as one of Rick’s meathead buddies with a tragic ’do and not much else to offer the project.

The rugby footage, while well shot from a technical standpoint, isn’t even compelling enough to make this one a heartstopper.