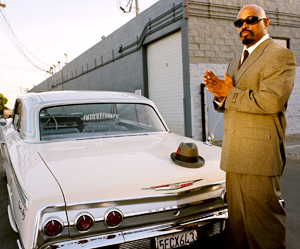 After spending nearly 20 years with the likes of Cypress Hill, the Reyes Brothers, Kottonmouth Kings and SX-10, Sen Dog is finally flying solo with Diary of a Mad Dog.

“This album is about doing whatever felt fun to me,” he says. “I tried to put some realism in it without making it dreary or sad.”

“Suburban Noize is like the perfect situation,” he says of his new label, which was formed in 1995 by Kottonmouth Kings and includes acts like Jada Pinkett Smith (and her band Wicked Wisdom), hip-hop group X-Clan and punk rock band D.I.

The independent label was a natural choice for Sen Dog, and not because he was once affiliated with the company’s founders. With Suburban Noize, Sen Dog had the opportunity to work on his solo project without an executive in a corner office crafting his art.

Specifically, working with an independent gave him an outlet to rap about real issues in his life. He was able to stay true to his vision of hip-hop.

“I went through a divorce, and life had overtones of mad drama going on,” he says. “But the album is more about how anyone’s life could be if it was upside down.”

Perhaps Sen Dog’s vision of hip-hop can be attributed to his days with Cypress Hill, when the genre had a different state of mind.

“Hip-hop is not message-oriented anymore,” he gripes.

While hip-hop may have develop into a self-centered culture, Sen Dog believes that rappers like B Real, Mellow Man Ace and himself have greatly influenced the genre.

“We had the liberty of saying what we wanted,” he says. “We were pioneers and activists in expressing our rebelliousness.”

Diary of a Mad Dog will be available Sept. 30.