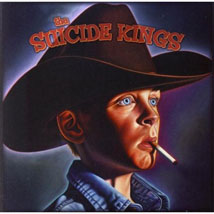 Suicide Kings lead singer Bruce Connole doesn’t sound much like the late Gram Parsons vocally, but he does have one trait in common with the originator of “cosmic American” music. Connole, like his musical progenitor, is masterful at drawing inspiration from the disappointing and seedy side of life.

“Suicide King” sets the album’s tone; the gospel-tinged number asks in advance for heavenly forgiveness for the dalliances vividly brought to life as the set progresses with tales of drunkenness, drug use and other sundry depravities. The Suicide Kings have a deep respect for country music of the old style; specifically the kind that shoots a man in Reno, the kind that gets caught in bed with a 16-year old, the kind that inexplicably falls in love at four in the morning.

Connole has fronted many bands over the years and longtime listeners may recognize a riff or two from the past, like his frenzied guitar solo on “Marie” that’s lifted from a Jetzons’ song called “4-3-1.”

The Suicide Kings is currently available.