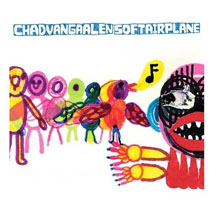 Sub Pop has latched onto another musical weirdo in the form of Chad VanGaalen. At its core Soft Airplane is folk music, but if the listener were to imagine VanGaalen being of the rustic type and communing with nature out in the woods somewhere, then his forest is populated with satyrs, nymphs and pixies, all of whom are hopped-up on magic mushrooms.

For lead off track “Willow Tree,” VanGaalen plays the folkie for the bulk of the song, singing over a bed of slow-picked banjo and easy-squeeze accordion. But the song takes a subtle psychedelic turn at its end, providing an indication of what’s to come on the following dozen tracks. By the middle of the record, Van Gaalen is full on tripping, using every instrument in a psychedelic way along with effects like chimes and the ticking of a clock.