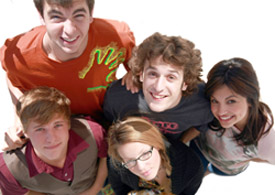 With the recent explosion of popularity of all things Web 2.0 (i.e. YouTube and MySpace), more and more people are starting to realize their ability to offer tremendous exposure. As such, the advent of the Web series looks to take advantage of these sites, combining streaming video with an easily accessible distribution model, your computer.

“Poor Paul” is a wonderful example of the type of DIY, internet-based “TV” series that we’ll be seeing many more of in years to come. The plot chronicles the fantastical adventures that fill the mind of Paul (Zack Bennett) as he struggles to get along with his two new roommates, the annoyingly smart Justin (Kevin G. Schmidt) and ladies man Clyde (Nicholas Braun).

Each episode of “Poor Paul” lasts no more than your average duo of YouTube videos and showcases the appeal of such a show. Its stories are short, clever and whimsical, albeit rather simple in nature. Those looking for Hollywood studio production value might be let down, but many of the more slick, studio-produced shows on the 'net have failed horribly. Perhaps the "down and dirty" approach was the intention of the "Poor Paul" creators, much akin to the hugely successful "lonelygirl15."

While one may be disappointed by the production values, there’s a charming, harmless vibe that flows off of “Poor Paul.” Bennett as Paul, looks like a younger, even goofier version of Andy Samberg (who also made his big break via Web-based sketch comedy) and possesses a similar naïve, silly charm that makes him stand out from the rest of the cast.

“Poor Paul” is a great example of how kids of today are choosing to exploit the technology that we have become so versed in. It may not be quite what you’re expecting, but those who are in need of a quick fix of amusing situational humor need look no further than my boy Paul.

You can find new episodes of Poor Paul every Tuesday on:

and exclusively in HD on: KoldCast.TV