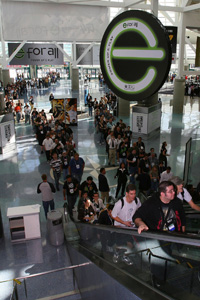 Between the unspoken acceptance of “Madden” games into male culture and the sudden mainstream success of the Nintendo Wii, it would be very hard to claim that video gaming is still the realm of nerds and recluses. For years, the ultimate proof that video games had finally come into their own was the Electronic Entertainment Expo, fondly referred to as E3.

Now, from Oct. 3 through 5, E3’s offshoot – E For All – will attempt for a second year to keep the mantle of the gaming event for the masses and to keep gamers willing to shell out $35 per day or $75 for the whole event. Of course, for those who know the whole story, this is no easy task.

E3 may have started as a place for game companies to preview their new titles to the media, but it quickly evolved into the Woodstock of the digital world. The whole Los Angeles Convention Center was crammed with loud, often blindingly lit and decorated booths – from the overwhelmingly large compounds of major companies like Microsoft and Rockstar to the simple offerings from various smaller, international companies in Kentia Hall.

Flowing through these booths like a bloodstream were the attendees. While there were still journalists, the event also drew international businessmen, game industry hopefuls and a unique but notable breed of tourists who would troll the booths for the best swag. To capitalize on this interest, the booths got louder, sponsors started staging massive outdoor events and giveaways and television stations began setting up headquarters in the hall to try to broadcast the whole thing live.

It was this festival atmosphere that would lead to the event’s downfall. Major game studios were sick of spending millions on booths in the constant need to outdo their displays and to court the throngs who cared more about free T-shirts than checking out their new games. Their pressure eventually turned E3 into a far more business-like setting where even members of the media could only attend by invite.

The outcry from the community against this move was not unanswered, though. While it would not be the E3 of old, there would be a new event for the public. Thus, in 2007, E for All – short for Entertainment for All – was born.

Developing a convention that would appeal to a wide audience is hard enough, but E for All had quite a bit against it. The ill will in the community caused by the sudden halt of E3 would only be overcome by a strong event, but the majority of the game companies that once fought for space and attention now seemed unmotivated to return.

In fact, in this year’s roster, the only big names on the list are Microsoft, Ubisoft, Electronic Arts and Nintendo. Meanwhile, other events like the Penny Arcade Expo had grown in enough popularity that it would be hard to attract audiences to anything less than a high-level, professional event.

With the lack of interest from major gaming studios, the focus of E For All shifted from games to gaming. Sure, there would still be new games unveiled, but in order to keep enough media focus to drive people back to the convention center, they would need a number of high-profile attractions. In this year’s E For All, the attractions are split between information about the game industry, competitive gaming and games as an art form in addition to the tradition of showcasing new games.

Getting into the Industry

One major element of the E For All convention that was not as readily featured in E3 is the introduction into the business of making games. This is not strange, considering the success of industry events like the Game Developers Conference. It is strange, however, that this was never considered part of E3, especially considering the sheer number of people who would blatantly hand their resumes to presenters at E3 in the hopes of getting a foot in the door.

Ironically, it is the Game Developers’ Conference that will be leading the largest industry development event at E For All. This GDC Game Career Seminar will run on Oct. 3, and offers a full day of lectures aimed heavily at college students who want to break into the gaming industry. The event promises to teach students about the industry, how to make a strong gaming industry-specific resume, which jobs are available in the gaming industry and much more.

Needless to say, if you are interested in joining the gaming industry, this seminar may be worth the cost of admission, but that’s not all. The Game Developers’ Conference’s presence at the event promises much more than just lectures. The event has also announced that it will have information for developers and a place where professionals and hopefuls can meet and discuss with Human Resources representatives.

While this is the only major career seminar announced by E For All’s organizers, it is not the only career-based attraction at the convention. The convention center seems to be heavily populated this year with many of the best-known game-related education centers and universities. Among the most well-known of these are the Academy of Arts University, Devry University and Westwood College.

One potential hidden gem in the convention will be the Entertainment Consumers Association. This game-based advocacy group fights for the rights of gamers and game companies in a society that seems convinced that video games are the new societal evil.

Not only does this seem like it might be an interesting place to learn about the movement, the ECA Web site does suggest that it can help interested students find the perfect university to learn the tools of the game design trade, look for scholarship and aid and even help people find gaming jobs. Plus, they offer a membership discount to students.

Of course, some people need to take their game to a higher level. Sure, there is always the thrill of Xbox Live achievements and regional leader boards, but if you are really good, you might get the chance to represent the United States in the World Cyber Games. This global gaming competition gathers the best of the best from around the world and brings them out to the international finals.

This year, the finals will be from Nov. 5 through 9 – a little over a month after E For All – in Cologne, Germany. This means that the appearance at the E For All convention will be one of the last stops before the best of over 700 players from over 70 countries go for the gold in the finals. Considering that the U.S. team took home the most gold medals in 2007, now would be a good time to find out about and start backing our national team.

If you would rather see the action at the convention, you can check out Intel’s Global Challenge Los Angeles at the E For All convention. This face-off is one step in the Electronic Sports League’s Extreme Masters tournament. Players will compete in “Counter Strike 1.6” or “World of Warcraft” events, and the winners will receive $80,000 ($50,000 for “Counter Strike” and $30,000 for “World of Warcraft”) and two slots in the finals representing the players’ home continents.

Like any other sports celebrity, Wendel has his own Fatal1ty line of merchandise. Instead of jerseys and jackets, though, Fatal1ty products include headphones, sound cards and motherboards. Of course, there are Fatal1ty hoodies and T-shirts.

The gaming phenom’s booth – his next stop on his promotional tour – will allow convention attendees to take on a band of professional gamers and, of course, the man himself. Maybe they won’t get a contract to tour as a gaming icon by winning, but competitors can probably pick up some swag.

Gaming as an Art

While most mainstream sources consider video games as distractions at best and “murder simulators” at worst, gamers know that video games offer a unique experience that no other medium could reproduce. Between the recent attention from Hollywood notables like Steven Spielberg and an appreciation of gaming music that has gone as far as the Hollywood Bowl, it is clear that many see far more potential from the gaming industry.

To this end, “Into the Pixel” – the first video game art award – will be displaying their top 16 picks at the E For All convention. The picks, all either in-game or concept art from games that range from “Guild Wars” and “Fallout 3” to “Mortal Kombat vs. DC Universe” and “Sonic Chronicles: The Dark Brotherhood,” show a level of artistic mastery that seem to only be overlooked because they were created for a video game.

While all of these top entries have been available for digital viewing at intothepixel.com since June, the physical artwork has been under wraps. E For All will be the official premier of this art exhibit.

When all is said and done, people will still be going to E For All to check out the games. With the holiday season within arm’s reach, the game studios will have quite a bit of gameplay available by the time E For All starts. More important, there are already a ton of new games that have released within the last few weeks.

The only big names that have been announced for E For All are Microsoft, Ubisoft and Electronic Arts, with an announcement that E For All will also have various hard-to-find Nintendo games available to purchase. That is not to say that there will not be any other game studios there. Smaller developers and producers – including Nexon, the publishers of “MapleStory” – will have their own booths at the event.

As always, there will also be various accessories and game-inspired items on display at the event. Take a load off in the latest game-powered Boomchair, don your microphone-clad armor with Gameskulls or pump up your system with a Fusion-io drive. You can even drink as a true gamer with the strange little Mana Energy Potions.

Unlike the E3 of old where sales were mostly kept in Kentia Hall – the small, out-of-the-way hall of the convention center – and typically were handled by small, third party vendors, E For All boasts a large Target booth. This onsite store claims to have the hottest new accessories and games that gamers are looking for.

Going to the Convention

If all of this seems like something that you don’t mind spending a few bucks to attend, your best bet is to head over to eforallexpo.com to help decide how much you want to get into and what you are willing to spend. It is typically best to buy your badge in advance, but get to the expo early because there will be a line for badges.

On the event days, try to get to the Los Angeles Convention Center before the 10 a.m. opening time. Fortunately, even if you don’t have a car, the Metro Red Line goes straight to the convention center. Of course, if you plan on bringing back bags of gaming souvenirs, maybe it would be better to drive.