NOAH AND THE WHALE: If The Life Aquatic were a band, it would be these guys. 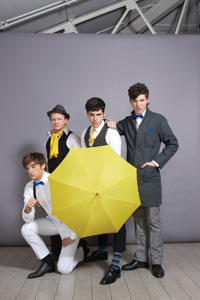 Whether you subscribe to the theory that they derive their name from filmmaker Noah Baumbach and his acclaimed dark comedy The Squid and the Whale or from a fixation on combining bible lore (you know, Noah’s Ark; Jonah stuck in the belly of a whale), the members of Noah and the Whale are hellbent on melding concept with great tunes. Lead vocalist Charlie Fink is the visionary behind this unique sonic constituency.

The 22-year old writes music that is evocative of films like Harold and Maude and Butterflies Are Free but with a modern edge. As a matter of fact, Noah and the Whale’s release, Peaceful, the World Lays Me Down, could very well be the musical answer to Wes Anderson’s filmography.

The band recently shot a video for the track “Shape of My Heart” – a tune that is not for lightweights. Although it’s backed by a sweet melody, “Shape” is ripe with sentiment and emotional layers. Left in the wrong hands, the track might prove disastrous, but to Fink and company’s credit, they’ve married the whimsy of a playful and sweet sound with lyrics that any good sap would love.

This gut-wrenching power can probably be attributed to Fink’s musical inspirations. He lists artists like Bob Dylan, Neil Young, Vampire Weekend and Laura Marling (a sometimes-addition to the group as well as his purported girlfriend) as some of his favorites. However, Fink’s still not convinced that there’s a formula for greatness.

“I really don’t think there’s such a thing as ultimate success,” he admits.

But the British press would beg to differ.

From the Daily Mirror to the BBC to The Sunday Times, music critics are falling fast for these folk-pop darlings. They’ve been called everything from “distinctive” and “resonant” to “the best band we’ve seen all week.”

NME touted Noah and the Whale as “romantic folk with a group mentality and epic scope.” That’s high praise from a market that is known to turn its nose at the flavor of the month without the slightest provocation.

Themes of love, loss, existentiality and overall quirkiness pepper that spot-on adulation. The other members of the band, which include Fink’s brother, Doug, on drums, violinist Tom Fiddle and bassist Urby Whale also deliver an offbeat edge to the group dynamic.

But for Fink, he’s more concerned with what the listeners think than the critics. And so far, his guess is as good as any when it comes to early buzz.

“We’ve only been out to SXSW, but that’s really sort of an industry thing so you can’t really tell,” he explains.

Still, that “industry thing” proved fairly lucrative for this quartet; Noah were signed to their label following their appearance at the renowned music festival.

For now, Fink just has one main wish where his band is concerned, and it has very little to do with scads of money or hot girls fawning over him: “I just wish [people] knew about Noah and the Whale, actually.”

A solid fan base is surely on its way. The band’s song “5 Years Time” has been getting early airplay on stations like Indie 103.1 and even follows the path forged by other indie-rockers like the Walkmen by being featured in a Saturn car commercial.

But for Fink, it’s a different track that holds his fancy.

Which brings us back to the business of the band’s name – a topic that everybody’s buzzing about but will remain as big a mystery as the meaning of life or the Loch Ness Monster as far as Fink is concerned.

“I like that there’s some confused battle about that one,” he says confidently.

Peaceful, the World Lays Me Down is currently available. Noah and the Whale will perform Oct. 4 at Detour Festival. For more information, visit noahandthewhale.com.