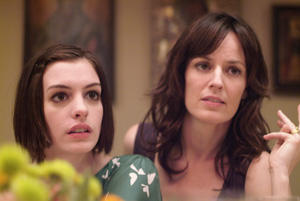 In a perfect world, we’d all get the chance to choose the people we’re related to. But in this one, it’s simply a matter of making the best with what you’ve got, or writing them off all together and going it alone.

In Rachel Getting Married, Anne Hathaway plays the sister from hell. She’s a young woman who has brought dysfunction into her otherwise happy home.

As Kym, she’s a 20-something who has just been given a weekend pass from rehab to attend the wedding of her sister, Rachel (Rosemarie DeWitt), at the family’s home in Connecticut. From the moment Kym arrives, attitudes change from happy and carefree to uneasy. Kym throws her weight around, says all the wrong things and leaves many in the wedding party to wonder why she was ever invited in the first place.

Yet, what many don’t realize is that Kym is still hurting from a deep family tragedy that happened when she was still a teenager. The breadth of the reactions she encounters stem from various resentments from that ordeal.

Hathaway revels in the chance to get to play against type.

“I love Kym’s almost compulsive need for honesty and how direct she is,” says Hathaway. “Her timing may not be appropriate, but she’s trying so hard to get across the chasm of tragedy that separates her from her family. She’s trying every day to choose joy and sobriety. She’s fighting for her place in the family, trying to acknowledge and atone in her own way.”

That fighting gets literal in a powerful scene in which Hathaway takes a right hook from actress Debra Winger, who plays her mother in the movie. The punches had to be rehearsed several times to ensure that the actresses didn’t accidentally hurt one another.

The end result is jarring, but adds to the pain of the story. Hathaway was excited to go up against the accomplished screen veteran, calling her “gutsy” and “dynamic.”

Bringing this unique and honest look into the modern American family to the page is writer Jenny Lumet. She is the daughter of famed film director Sidney Lumet and the granddaughter of jazz chanteuse Lena Horne.

As the product of a multi-racial background, Lumet’s script, along with the bold direction of Jonathan Demme, reflects a marriage and gathering of people from a myriad of racial and cultural backgrounds. While most movies would have simply presented the stereotypical WASP-y Connecticut love match, Rachel Getting Married displays a very real love between a black male and a white female who marry (in of all things) an Indian ceremony – complete with an elephant-shaped cake.

“Most of the people in the film are friends of Jonathan’s,” she says.

And an impressive list of friends they are. For any devout music lover, Rachel Getting Married is a who’s who of New York cool.

Singer Robyn Hitchcock makes an appearance as a wedding singer. Rapper Fab Five Freddy is also among the guests. But most surprising among the co-stars is Tunde Adebimpe from the prog band, TV on the Radio.

As Rachel’s husband-to-be, Sidney, Adebimpe gives a tender and soulful portrayal as a man caught in the middle of this family and its drama. Adebimpe also gives his fans a taste of what he’s best known for with an a cappella performance of Neil Young’s “Unknown Legend.”

Hathaway admits to enjoying her films that have paired her with musicians. In 2006, she played opposite actor and musician Adrian Grenier (of the band the Honey Brothers) in The Devil Wears Prada.

What does she like best about working with these multi-talented guys?

“Getting new additions to my iTunes,” she says, laughing.

Interviews
Maleficent doubts her fitness as a mother. So did Angelina Jolie
894 views