Dodgers Head To The Playoffs 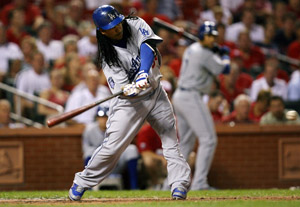 It wasn’t long after the Dodgers’ 6-4 loss to the Padres Sept. 25 before the first bottle of champagne was popped inside the clubhouse and jubilation ensued. For despite the loss, the Dodgers had clinched their division for the first time in four seasons when earlier in the day the Arizona Diamondbacks lost to the Cardinals.

Blessed by the curious fate of playing in the worst division in baseball and gifted with the late season acquisitions of Manny Ramirez, Casey Blake and Angel Berroa, the Dodgers had at least triumphed in a year plagued by injuries and inconsistencies in both pitching and hitting. A team that spent 90 percent of the season nipping at the coattails of the D-backs was now showering in gales of sprayed bubbly. Whatever can be said about this ball club and their deficiencies on the field, no one can question their ability to party.

Not after Thursday night when following the festivities in the clubhouse they re-emerged onto the field to stir the fans to euphoric heights with their raucous celebration. A brief moment of restraint came as manager Joe Torre addressed the crowd directly, thanking them for their support and predicting much more celebration to come in the month of October. He was then promptly soaked with champagne.

Ramirez, Berroa and Delwyn Young climbed atop the Dodger dugout and tossed division champ baseball caps, balls and what looked like candy, over the enraptured crowd. Pitcher Joe Beimel was seen near third base wearing nothing but his Dodger bathrobe and a wide grin. An infectious giddiness spread like wildfire around the stadium, a sense of magnificent possibility, a prophetic “this is our year” vibe akin to an Obama rally.

And speaking of folks from Chicago … the Dodgers now must face the long expectant Cubs. No team in baseball feels more entitled to win than the Central Division Champions, who had the best record in the National League this year. They haven’t won a World Series in 100 years and will certainly bring all that pent-up frustration to Wrigley Field in Chicago tonight for the first of a five-game series.

Incidentally, the Dodgers lost all three games they played at Wrigley this year, and they will start by facing pitcher Ryan Dempster whose record is 14-3 at home. But hey, that was the regular season, and all that is finished…