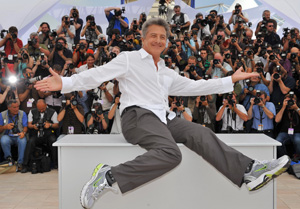 If you’re reading this right now and would like to be there when Steve Martin introduces a screening of The Jerk or Dustin Hoffman presents Tootsie then start running, because American Film Institute’s sold-out Night at the Movies event is giving you a last-minute chance to see one of 12 classic films introduced by the star that made it famous.

Like last year’s event of the same name, this year’s Night at the Movies is taking over every theater at the ArcLight to simultaneously screen timeless films like American Beauty, The Silence of the Lambs and The Man Who Would Be King with a unique opportunity attached – to watch them in the presence of Annette Bening, Jodie Foster and Sean Connery.

All tickets to the one-night-only event sold out within hours of going up, but due to their stringent admission policy (you have to show up with a physical ticket, which needed to be claimed before last week), ArcLight will be opening up a “rush line” at 6 p.m. for those who want to try and swoop on the nonsense.

While original tickets sold for $25 and included a free soda and popcorn, the rush line tickets will be sold on a cash-only, as-available basis without the luxury of complimentary snacks. To make it even harder for Denzel Washington fans to catch a glimpse before a screening of Glory, the possibly un-claimed tickets won’t be released to the “rush line” until five minutes before the movies start at 7 p.m.

So if you’re not already running (or driving or riding a bus) towards Hollywood, then you’re probably missing out on a chance to be a part of the most star-studded event this side of the Oscars. And if you don’t get in, at least you can stand on Sunset and ogle the red carpet for Mike Myers on his way into a screening of Austin Powers.