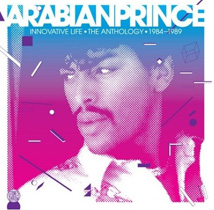 Arabian Prince also records as Professor X and has pulled shifts with Egyptian Lover, the World Class Wreckin’ Cru and most notably, N.W.A. This material was mostly recorded pre-N.W.A. though, at a time when electro was flourishing, so the idea here is to get bodies on the dance floor as opposed to talking about piling them up in the streets.