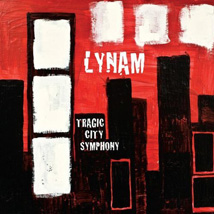 Lynam is three rockers who are led by singer and multi-instrumentalist Jacob Lynam. The other two members of the band are Jacob’s brothers, David and Mark.

The siblings know their way around a few different styles of rock tunes, reeling off sound-alikes of Def Leppard (“Is This a Heartbreak or a Loaded Gun?”), the bluesy side of Aerosmith (“Enemy”) and Nirvana (“Lindsay Says”) to start off Tragic City Symphony. That would be an OK thing if the rest of the album sought out its own identity, but it doesn’t.

Instead the album falls into a loop of tributes; a couple more grunge numbers, another Aerosmith (this time the schmaltzy ballad side of that band) and even a take-off on Kid Rock with “White Trash Superstar.”