Body of Lies: DiCaprio and Crowe pair up in Ridley Scott’s political thriller 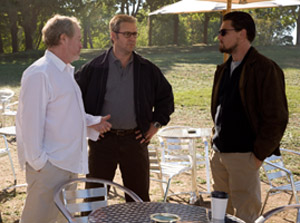 Not since the days of Jack Ryan has there been a film that blended political espionage with cat and mouse thrills as adeptly as Body of Lies.

Directed by Ridley Scott, the film marks his fourth endeavor with Russell Crowe. Their relationship has moved beyond bromance. They are now a muse for one another.

“The things we’ve done together, Ridley was like, ‘Right, this is what we’re doing’ and I said ‘Cool,’” Crowe explains of their unerring trust in each other. “That is a unique situation to come along in a performer’s life.”

Taking on Body of Lies came with additional bonuses.

“The first thing I got was a phone call from Ridley saying, ‘How would you like to put on a large amount of weight?’” Crowe recalls, laughing. “That always appeals to me.”

“The pace at which he shoots is really intense, really fast paced and you have to be prepared for anything at any given moment,” DiCaprio says, getting excited at the memory. “He literally has helicopters on standby circling around, ready to get an overhead shot of you running through an entire city. But once you get accustomed to that pace, you embrace it and enjoy it, and it starts to become this adrenaline-fueled environment that you love.”