Good Dick: A Film About Love, Not Lust 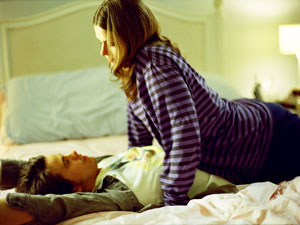 What does Good Dick mean to you? That was the question writer-director-star Marianna Palka asked herself when she sat down to write the script of Good Dick costarring her boyfriend of nine years and producing partner, Jason Ritter.

The film is a delicate, intimate portrait of two incredibly broken people who may just be the other’s salvation. Ritter explains it’s about love, not lust.

“These characters are blown out exaggerations of the two sides of love, which are; ‘I’m here, I’m in love and I want this’ and the other side, ‘Get the hell away from me and I’m terrified,’” Ritter says. “Sex can be so creative and beautiful, and it can add so much. But it can also be so destructive. People aren’t really aware of the power it has.”

“I was going for what is really sexy,” Palka says in her lilting Scottish brogue, something she stifles in the film. “It sort of feels like 1970s movies. The sex scenes in those movies happen behind a door or through a window or in the dark. What you don’t see is more exciting.”

For Palka, being a first-time writer, director and star unfolded naturally.

“I wrote it really organically,” she says. “This was my first script. So I just sat there and wrote it. I didn’t know before I started that there were steps you have to go through, software you were supposed to use. [But] having written it made it easier to direct. Being in it made it easier to direct. All the jobs helped one another. It was like a treasure hunt or something.”

Interviews
Ai Weiwei on activism in the US, his art response to COVID-19 and a secret Wuhan film
488 views

Interviews
James Bond producer: 007 ‘can be of any color’ but never a woman
1,793 views

Interviews
For Martin Scorsese, making ‘The Irishman’ was about ‘learning to die’
1,415 views
bid=||