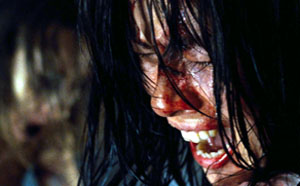 October might as well be called national scare-the-pants-off-you month with the seemingly constant barrage of horrific releases set on doing just that. Those who wish to take a break from the typical Saw You Scream Last Friday the 13th need look no further than the Los Angeles Screamfest. This weeklong festival showcases fresh talent and foreign thrills that represent the best of the scare genre.

Last year, fans were introduced to a repertoire of genre treats including a premiere of George “Night of the Living Dead” Romero’s latest film, the oddly familiar Diary of the Dead. This year, opening night duties are designated to the long overdue and highly anticipated Trick ’r Treat, which has been garnering nothing but rave reviews. Other tasty numbers include Splinter, Feast 2 and Train.

Screamfest has always been a place to showcase rare international gems that would not otherwise have theatrical distribution in the states. In addition to Britain’s Eden Lake and Sweden’s Let the Right One In, closing night duties go to the highly controversial French film Martyrs, hailed as the torchbearer of a new generation of horror films.

Martyrs, which has been compared to the similarly controversial French film Irréversible, has received either ecstatic praise or utter damnation due to its highly disturbing yet thought provoking nature. Whether you view the film as a masterpiece of cinema or a piece of crap depends on your personal taste and ability to stomach NC-17 levels of violence. Regardless of your view, Martyrs is guaranteed to provide a visceral thrill ride unlike anything you’ve seen before.

The horror community in Los Angeles is like a club, a small and intimately demented YMCA if you may. Screamfest is a chance for you members that prefer blood and guts to hugs and kisses to wave your flag with pride. Throw on your black shirt and embrace your inner demons.