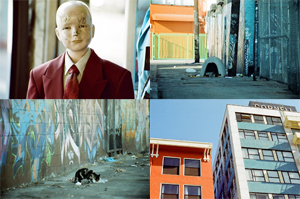 I’m a relatively inexperienced photographer, but I do know Los Angeles well. And having grown up here, I’ve felt very strongly about its transformation through recent overall gentrification. My happiest memories of the city itself hark back to the late ’80s and early ’90s, when selective memory allows me to recall a sunny and punk-friendly Los Angeles not unlike the backdrop of L.A. Story or a number of Francesca Lia Block’s novels.

Today, however, it is not this Los Angeles I notice most but the one occupied by the city’s misfits. Downtown L.A. is becoming cleaner, shinier, more luxurious – represented here by the photo of two colorful buildings which sit side by side on Los Angeles Street. Venues are being built, lights are glowing, artists are becoming more prominent. Great. Further southeast, below 5th and beside Los Angeles, among rows of rolled fabric and an array of flowers, there still remain a good few of the estimated 80,000 homeless in Los Angeles – specifically, the approximate 900 who live on Skid Row.

These people share street space with trash, as well as stray animals trying to survive on said trash, and live separately from those who work in that glass high rise collection a few blocks up, easily visible from this part of town. Like many, I work in one of these high-rise buildings and, like many, live with a heavy heart for not being able to solve the neighborhood’s biggest crisis. The theme is rather cliché, but unfortunately is still very relevant to our city.