Dot the I: Actor James D'Arcy and Director Matthew Parkhill Dish on the Making of their New Romantic Thriller 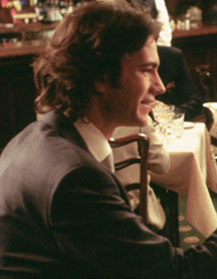 In Matthew Parkhill’s debut feature, the romantic thriller dot the i, James D’Arcy (Master and Commander) plays one of the lead characters, Barnaby. After their first meeting to discuss the part, though, one wouldn’t have expected D’Arcy to end up in the film.

"It was a disaster," D’Arcy says. "I went in and I said, ‘I think you’ve got this problem with the script and that problem. And he probably thought, ‘Get this guy of here.’"

Parkhill, however, puts it a little kinder.

"The first meeting wasn’t great for both of us," he says. "He had just gotten off a plane and had his own shortcomings about the script."

The crew looked at many actors for the role, but months later Parkhill met with D’Arcy again. This time it went a little better. "The second time we met, it was immediate that he was the one," Parkhill says. "We sort of went the roundabout route."

D’Arcy doesn’t remember how he got involved again.

"I came back and I screen-tested," he says. "I’m very pleased [Parkhill] gave me the chance. One of the things I learned was keep your mouth shut when you’re going for a part. I hadn’t focused on the good things about the script, because it is really terrific stuff. But he had rewritten some of it. He had taken out some of the stuff that I had mentioned."

Dot the i is about a love triangle between Barnaby, his fiancé Carmen (Natalia Verbeke) and a stranger named Kit (Gael Garcia Bernal of The Motorcycle Diaries) who Carmen meets on the eve of her wedding night. The story isn’t plain and simple, though, with numerous twists and turns to keep the audience guessing.

Until his current film, Parkhill had only made short films. He was able to get the script to Bernal right before he broke out in Y Tu Mamá También. Although Parkhill didn’t have the money to make the film at the time, Bernal said he would do it and, true to his word, he stuck with it.

"When I met Gael, I knew he was something special," Parkhill says. He soon surrounded himself with more talent, including D’Arcy.

"I was lucky, huh?" Parkhill says, referencing his group of actors. Still, the scope of the project seemed a little overwhelming.

"It was much scarier than I would have thought," he says. "I remember one moment, when we were using an old school as a production office, and I saw a bunch of trucks pull up outside, and I thought, what the fuck? And someone told me those trucks were for us."

Parkhill must have masked his feelings well, though, as D’Arcy couldn’t sense any nervousness.

"Matthew has a pretty smart head on him," he says. "He clearly wasn’t frightened."

This feature film marked quite a step up from the shorts Parkhill had done before, one of which just involved him and a DV camera, as he puts it.

"The biggest difference is the size. There’s so much paranoia and shit going on behind the camera when all you’re doing is trying to create that freedom in front of the camera."

Parts of this film required the use of video cameras, and Parkhill says he gave the actors the chance to shoot themselves. Some of their work ended up in the film.

"DV is part of the story," he says. "With the DV camera constantly running, there’s so much choice in the edit."

D’Arcy says he enjoyed getting the chance to use the camera.

"I did shoot a bit of stuff. I’m not sure if what I shot ended up in the film, but it was fun."

Fun, games and DV aside, D’Arcy says he’s glad the film – which wrapped a couple of years ago – will actually be seen post-Sundance.

"I’m really pleased that it’s getting released in some capacity," he says, adding, "College students are a pretty good audience for the film. I hope it will get some sort of underground following."

Dot the i opens March 11 in limited release.