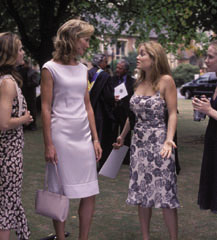 The recreation of an authentic family environment remains one of filmmaking's most elusive and difficult challenges. Breathing life into the Wolfmeyer family's four daughters, Keri Russell, Alicia Witt, Erika Christensen and Evan Rachel Wood drew from both training and personal experience. For these young actresses of The Upside of Anger, in theatres March 11, the truthful construction of a broken home, replete with both sadness and humor, became their ultimate goal while making the film.

Keri Russell, who plays Emily, an aspiring dancer whose artistic dreams clash with the depression of her embittered mother, describes the importance for the actors of immediately establishing a believable domestic atmosphere for the abandoned Wolfmeyer women. Filming on location in England, she notes, was immensely conducive to cast camaraderie.

“Being on location with people really lends itself to getting more intimate,” she says. “We got there about two and a half weeks early and we all sat around and did readings of the script a lot. There was a lot of cooking, getting dinner ready scenes, and [director Mike Binder] wanted us to make dinners together, so we did that a few times.”

In addition to these scheduled rehearsals and culinary ice-breakers, Russell says that other, more spontaneous events brought the cast together.

“This freak thing happened. We were sitting outside a pub and, long story short, a cat literally flew out of the sky, opened up [Alicia Witt’s] face,” Russell says. “So here’s this girl that I barely know, and I’m sitting here with her face gushing with blood, we’re about to start shooting … so we got very close in an evening.”

For Erika Christensen, who plays Andy, the film was truly a union of her two families, both onscreen and off. After Christensen was cast, her brother Dane expressed interest in the project, and she called Binder to secure him an audition. Binder was impressed with the “mellow kid” and cast him as Evan Rachel Wood’s love interest, Gorden.

During filming, Christensen says that having her brother on set established a unique sense of fun and support.

“We didn’t have scenes together but we were on the set at the same time, so I’d just say, ‘Hey, dude, come hang out in my trailer, let’s listen to music!’ And for his big scenes I came to the set to watch,” to which she adds, “I didn’t coach him … I ran lines with him to help him learn his lines and we would do silly things like rehearse with different accents.”

With two of their children in the cast, the entire Christensen family also frequently visited the London set.

“It was my two families,” Christensen says, which resulted in an environment that helped maintain the Wolfmeyer’s scripted familial bonds. “I’m so social when I’m working, especially on a film like this where you know that these characters are supposed to be really close.”

Wood, meanwhile, drew from her past relationship with Christensen to portray the youngest daughter, affectionately nicknamed “Popeye.” Though Wood grew up in a family with only two brothers, she found her “sister” in Christensen.

“I’ve known Erika since I was 9,” Wood says. “My mom actually taught at the acting studio that we went to a lot, and [Erika] was my mom’s favorite student … We actually used to joke about how we had to work together some day, so it’s really, really cool that it worked out.”

For Wood, having an old friend and acting partner on set was doubly advantageous, providing a sense of comfort and familiarity within the ensemble. As the youngest actress of the group, Wood also found herself living her role as the little sibling, even idolizing her bigger sisters.

“I’m still shy around all of them because I do really look up to every one of them,” she says.

According to director Binder, the realistic family atmosphere amongst the cast was achieved.

“I just wanted those four girls to have some real experiences together, drive around in cabs and go shopping,” he says. The experiences of group outings, preparing meals and even celebrating birthdays together formed the heart of the onscreen chemistry. Binder adds, “it’s a real actor’s trick but it really works.”

The Upside of Anger releases in theatres March 11.