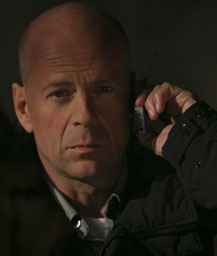 If you just can’t get enough of watching people yell into cell phones, you’ll love Hostage. Bruce Willis stars as Jeff Talley, an LAPD hostage negotiator who, devastated after an incident goes horribly wrong, retires to become a small-town police chief. But when three delinquent teenagers take a wealthy man (Kevin Pollak) and his family hostage in their palatial, high-tech home, Talley gets thrown right back into the kind of situation he thought he’d left behind. Add into the mix the fact that Talley’s own family becomes entangled in the life-or-death confrontation, making him a man on the edge and willing to stop at nothing.

Hostage starts off well enough, with a strong prologue and opening act. But somewhere in the second act it loses its focus and becomes a mishmash of suspense and action movie clichés. The biggest problem could be the editing, which jumps around so much that the story doesn’t feel like a unified whole, but rather just a series of events that may or may not be related to one another. Talley often behaves irrationally and we are denied information we need to understand what he’s planning.

Likewise, Mars (Ben Foster), the “bad guy” of the three teens, behaves entirely without motivation. We are to assume he just does things because he’s evil, which really isn’t good enough.

At the film’s conclusion nothing is really resolved. The movie doesn’t conclude so much as it just stops.

The music doesn’t help much either. The score is so melodramatic that it would make Danny Elfman blush. When the music just keeps pounding away through the whole movie with all the subtlety of a sledgehammer, it loses its power at the moments when we really need it.

I am told that the Robert Crais novel on which this movie is based is actually quite good, and I believe it. In a novel, the writer can take time to tell you what’s going on in the characters’ heads to make them believable. But translating that to a movie takes a bit of finesse, and director Florent Emilio Siri (whose previous two credits are “Splinter Cell” video games), just may not have the chops.