Back to the Future: Adrien Brody Plays Tormented Time Traveler in Psychological Thriller, The Jacket 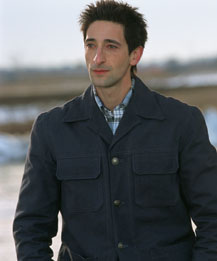 What’s a guy to do once he’s won a Best Actor Oscar for his first major starring role (The Pianist) and kissed the sultry Halle Berry on national television? For most people, the answer is, whatever he wants. For Adrien Brody, it means taking time to do some quirkier films. He played a crucial but subtle character in last year’s The Village, and now Brody has turned his attention to a more unusual film – The Jacket.

The film tells the story of a gulf war veteran who, through a series of twisted events, ends up in a mental hospital and is subjected to strange “treatments” by the doctors there. One of the more extreme treatments entails being strapped into a straightjacket and then put into an airtight morgue drawer while pumped full of hallucinogens. Once in this state, Brody’s character, Jack Starks, begins to time travel into a future in which he meets a girl from his past. Though it may sound convoluted on the page the film visually cuts together beautifully.

Once Brody and costar Keira Knightley (Pirates of the Caribbean) connect onscreen, the plot really takes off. In the future, Brody’s Starks finds out that he will be killed in this hospital, and has only short periods of time in the future to find out what happened to him. Despite that winding description, however, the film is not a horror flick.

Known for being an extreme method actor (a technique in which an actor undertakes similar physical ordeals as his character in order to understand how to play the part firsthand), Brody tested himself to his very limits in preparing for the film. To fully grasp what it would be like for Starks to be locked in a morgue drawer for hours on end, Brody did quadruple sessions in sensory deprivation. Immersed in a dense saline solution that cut him off from almost everything, he found himself forced to focus on his own inner processes.

“You become very aware of how your mind works,” Brody says, smiling. “You discover that your mind works cyclically. It’s interesting to see what you find.”

This is but one of the many things Brody did to get himself inside Starks’ head. He also went to extremes in preparing for 2002’s The Pianist, selling his car and getting rid of his apartment, as well as forgoing the pleasures of normal life to try and connect with his character’s loss in that film.

British director John Maybury, who until now had only helmed experimental films, directs The Jacket. His first dive into American mainstream isn’t just another two hours of “shite,” as he describes most Hollywood films. The film is very different from most of the pieces out there and it echoes with Maybury’s European touch. Brody reveled in the aesthetic center of the film, loving how, as he says, “It had a real artists’ feel to everything … On all levels it was a very creative process.”

The film’s story and ending are not concrete either, with even the cast members having different takes on what actually occurs over the course of the film.

“It’s amazing to go to a movie and not be spoon-fed. I like the ambiguity of it,” explains Brody, who notes that his character’s amnesia and mentally unstable nature allowed him great freedoms in playing the part.

“He doesn’t have any allegiance to his own past,” adds Brody, letting his trademark smirk drift across his face. “It’s liberating, but at the same time – who are you?”

With all this analysis, there’s only one question left to be answered – what, exactly, is this movie about? And what really happens in the last frame?

Brody shrugs, saying, “That’s up to you.”