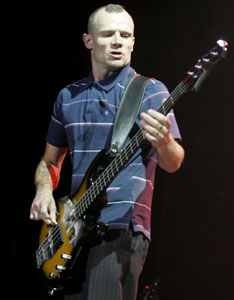 KSCR Friends’ Countdown to 2010 Alumni of KSCR, USC’s student-run radio station, have initiated a fundraising campaign to raise $1 million by 2010 – the 35th anniversary of KSCR. The fundraising is set to begin Nov. 1 at USC’s homecoming game where there will be a KSCR booth on campus. Proceeds will go to the purchase and repair of equipment and stipends for the staff. KSCR can be heard on 1560 AM or online at kscr.org.

LMU a Top School for Hispanics According to the May 2008 issue of The Hispanic Outlook in Higher Education magazine, Loyola Marymount University was placed on the list for the top 100 colleges and universities for Hispanics. The rankings are determined by the total number of degrees that each school awarded to Hispanics and also the number of Hispanics enrolled at that college. LMU ranked 93rd for bachelor degrees awarded, and ranked 95th for enrollment, with 1738 enrolled out of 8972 students.

Flea a Student at USC You read the title right! Flea, the bassist for the Red Hot Chili Peppers is now a student of music. He’s attending USC’s Thornton School of Music as a freshman this fall. Who would have thought that school could get this “hot?”

SmartyPig Want a nice spring break vacation but need to save the money first? SmartyPig is an online, virtual piggybank for anyone looking to stow away some cash. Go online, register for an account and determine your saving goal and the date you wish to accomplish the goal by. Then, SmartyPig will help you by creating a timetable to reach your goal. Couldn’t you do this by simple math calculations? Well, the difference between SmartyPig and other banking systems is that you can use social networks such as Facebook and MySpace to make your goals public, which may increase savings. Plus, you can earn cash back from over 25 top retailers such as Best Buy and Amazon. For more information, visit smartypig.com.