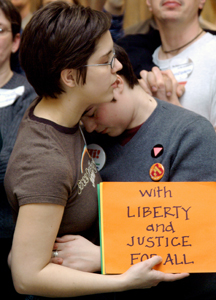 Covering the battle to keep the right to marry legal in Massachusetts, Saving Marriage shows every side of the issue with heart and intelligence. With Proposition 8, also known as the “Eliminates Right of Same-Sex Couples to Marry Act,” being presented to California voters in next month’s election, the release of this documentary could not be more timely.

“If we lose here it would be a major step back as we are seen as a large, liberal state,” producer/director Michael Roth comments on the film’s local pertinence. “If we can win here, other states might take another look at the issue and adopt it.”

According to Roth, the title refers to the fact that opponents “may be trying to save what they consider to be a traditional marriage, but we are also fighting to save marriage – not just them.”

Producer/director John Henning adds, “The right to marry is the most important right that gay people can have right now.”

On why there is such a battle for the actual word “marriage” when a “civil union” would provide the same rights that gay people are seeking, he adds, “Marriage provides the community with dignity and social recognition as a member in society not on the outskirts of society.”

Through this poignant film we witness the first legal gay marriage, which happened to be between two men, and took place in a church filled with friends and family. We are also invited to a small, simple ceremony between two women whose invitations were declined by people very close to them just because they are of the same gender.

Roth explains that the documentary captures the raw emotional feeling of the issue because the people featured took their time to build a trusting relationship with the filmmakers, and it’s evident in the film.