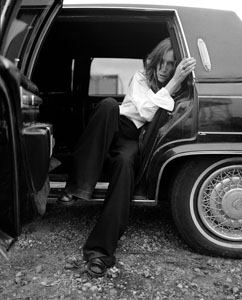 Over fashion photographer Steven Sebring’s gorgeously languid, otherworldly black and white images, rock icon Patti Smith introduces herself: “Life is an adventure of our own design, intersected by fate and a series of lucky and unlucky accidents.”

Smith’s adventure has been multi-faceted. Having been raised in the suburbs of Chicago, Philadelphia and, for the most part, New Jersey, Smith left in the late ’60s for New York City, where, as she puts it, she was formed and deformed, given a chance to be totally destroyed and totally created, and where what was inside of her could flower and surface.

What was inside of her was a hunger for inspiration and expression; Smith quickly found friends, mentors, collaborators and, at times, lovers in William Burroughs, Allen Ginsberg, Gregory Corso, Bob Dylan, Sam Shepard and Robert Mapplethorpe, for whom she served as a principal muse well into the ’70s. She was a guy’s gal, member of the tribe whose roots, for her, extended from the seeds of punk rock to the beat poets, through ancestral stretches to Shelley, Whitman, Rimbaud and William Blake.

First and foremost a poet – articulate, inspired, measured yet explosive with her words – Smith never imagined she would find expression in rock ’n’ roll. But her voice and words lent themselves to the spirit of the music, resulting in albums like 1975’s Horses and the following year’s Radio Ethiopia, recordings whose convergence of spoken word and three-chord guitar is, even today, arresting.

Eleven years in the making, Sebring, who deservedly won the cinematography award for the film at Sundance, tracks Smith as she tells the story of how she came to New York, left it – and music – for more than a decade for the suburbs of Detroit to be a wife and mother, and, after the untimely deaths of her husband (Fred “Sonic” Smith of the MC5) and younger brother, returned to the city and the stage in the mid-’90s with encouragement from the likes of Ginsberg, Dylan and R.E.M.’s Michael Stipe. She’s been performing with her band ever since.

Less a linear documentary than an exploratory portrait of the inner life of a truly original American artist, Sebring’s film is full of spontaneous scenes between Smith and friends and quiet moments of Smith in contemplation. With relatively little concert footage and minimal attention paid to Smith’s political activity, which has steadily grown in recent years, the film exposes the artist’s world by drawing up a landscape filled with those objects – the things, the souvenirs, the photographs, the words, the memories – that have held meaning for Smith in her life.

Smith has an immense amount of dignity and joy to share, and Sebring carries an aesthetic beauty throughout, but if you’re not already a fan of Smith and her peers, then Dream of Life will most likely leave you confused, alienated and/or out the theater door a half-hour in.