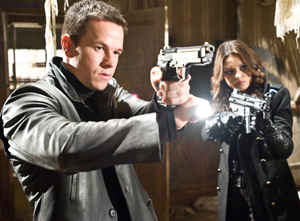 Based on the highly successful video game series, Max Payne stars Mark Wahlberg as the titular character, a cop tormented by the murder of his wife and infant daughter, hell-bent on revenge and obsessively following any whiff of a lead toward possible justice; a search that sinks him into an unthinkable underworld.

Although Wahlberg had his own video game back in the Funky Bunch days which allowed players to produce hack-job videos for songs like “Good Vibrations” (It has the dubious honor of being listed as the eighth worst video game of all time by PC World.), that was hardly preparation for the arduous physical and emotional requirements of this role.

“The biggest challenge for me was going to that emotional place and having to imagine something horrible happening to my family,” Wahlberg reveals. “That’s why I couldn’t wait for the last day of filming so I can go home and hug my kids and get those thoughts out of my head.”

“The biggest physical challenge,” he says with an exhausted sigh, “was keeping up the mystery and façade that I’m actually tough and cool and it doesn’t hurt and I’m not scared. I’m not the thrill seeker that I used to be. In between movies, I tell them to wrap me up in cellophane so nothing happens because I want to be able to play with my kids.”

“I’ve been very fortunate and very lucky,” Wahlberg continues. “I’ve had a bunch of close calls, but with a movie like Max Payne you want to get in there and make it as realistic as possible. I thought it was time to go back and do what I think suits me: busting some heads and having fun, kicking ass on the bad guys.”

“He’d come to work every time with some new Band-Aid on him,” Beau Bridges, who co-stars as Max’s mentor, B.B., marvels, “a new thing wrapped up. [Mark] does some pretty remarkable physical feats.”

“John [Moore] is a very demanding director, and he knows exactly what he’s doing,” Wahlberg says. “We wanted to make it look real, so we got in there.”

“When we were on set, John’s so passionate about the takes, he’d yell at the top of his lungs when we did something right, and when something went wrong, you would hear another kind of yell” rapper-turned-actor Chris “Ludacris” Bridges, who plays Internal Affairs detective Jim Bravura, remembers. “That’s how passionate he was. Every time you got something right you’d hear ‘YEAH!’”

“’That’s in the movie!’” Beau Bridges hollers, laughing at his imitation of the director.

“I read the script, and you could just tell by the descriptions that it was going to have a real high sense of style. John Moore really brought that,” Beau Bridges says with admiration. “It’s a really strong story, this guy going off to find the killer of his wife and child. That’s different than a lot of movies that come out of games. I’m glad to be a part of it.”

Also thrilled to be involved was Mila Kunis as Mona, a beautiful and ruthless assassin, though she too had her own set of obstacles to hurdle over.

“The clothes sucked!” Kunis wails. “Oh my God, it was awful.”

Adding to the difficulty was frosty, frigid Toronto, which doubled for New York.

“Mark was all bundled up in jackets, wetsuits and coats, and I was in a leather bustier, black pants and five-inch heels. Five inches of snow in five-inches heels? I’m klutzy. It’s bad,” she laughs. “What made me feel empowered was the gun not the clothes. If I had the gun, it didn’t matter what your size was, what your stature was, as long as I was holding the weapon, I win. John for some reason made me learn how to take a MK5 apart and put it back together blindfolded. I had weapons safety [training], and I liked shooting a gun a lot more than I thought I would.”

“She needed to understand ‘actor safety’” Wahlberg ribs. “She was swinging at me like a wild person.”

While she might have been untamable during fight scenes, Kunis was the most equipped when it came to “Max Payne” knowledge. She was the only actor familiar with the game before filming began.

“I’d never heard of the game. I’m big on ‘Pong,’” Beau Bridges laughs. “But I have five kids, and when I told them ‘I’m going to be in Max Payne,’ they said ‘MAX PAYNE?! Oh man!’ I knew it was a game that had a big following, so that was exciting.”

Wahlberg, on the other hand, was hesitant because of the source material.

“When I read the script, a bit of a red flag popped up only because I grew up playing Atari, and there’s not much of a story there,” he ventures.

“But seeing this game and realizing how elaborate the story is, how cinematic and how much games have changed,” he trails off, almost in awe. “Obviously knowing how important this game is to a lot of the diehard game fans, we wanted to satisfy them and hopefully introduce a bunch of other people through the movie to the game.”

As for playing the role of Max Payne, Wahlberg just shakes his head, smiles and says, “Being able to do all those things, it’s what every kid dreams of.”