Tegan and Sara: Four Times the Fab in a Fan-Friendly Setting 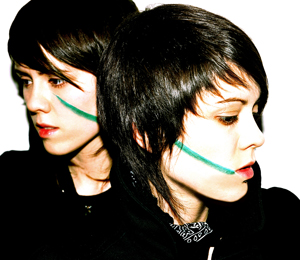 Sara Quin of Tegan and Sara is in good spirits, speaking from her home in Montreal following a brief summer vacation. As close to a vacation as the two get, that is.

Most people don’t do a video shoot or work on material for their next album while on vacation, but as the self-described “workaholic” explains it, “I enjoy the process of making music and playing it, but sometimes when I get pent up, I just want to take a huge chunk of time off. But then halfway through the chunk of time I’m like, ‘What is my purpose? What am I doing? What’s going on in my life?’ and I feel totally aimless.”

Prior to the brief period of respite over the summer, Tegan and Sara had been on tour nonstop in support of their release The Con, even performing alongside a veritable roster of who’s who in the gay community on Cyndi Lauper’s True Colors tour. But their first stint in the states involved a collection of intimate gigs that served to introduce their fan base to the new material but left many disappointed when shows quickly sold out.

“In L.A. we knew that we could move into a bigger venue than what we played last time,” says Sara. “But honestly once you get into the 1,500, 1,600 people [venues], that’s my max. That’s what I feel comfortable with. In some places we do over 2,000 or even 3,000 tickets and … it’s thrilling, really fun and feels big and exciting, but it’s just not as intimate. You’re not really able to relax into the show.”

As a solution (and special treat for Angelenos), Tegan and Sara will play a series of four gigs at the Henry Fonda Theater to allow hardcore fans and casual concertgoers the opportunity to witness their live show in a more fan-friendly setting.

“Obviously we couldn’t do that in every city or we’d be on tour for an eternity!” Sara laughs.

The duo have selected some choice support acts as well: all-girl, indie rock trio Girl in a Coma and a fellow Canadian, folk troubadour Dallas Green of Alexisonfire, performing under his moniker City and Colour. Girl in a Coma had previous pitched the idea of a support slot to Tegan and Sara and now just seemed like the right time, while Green is a friend of Tegan’s from the Ontario music scene. For an act that got their start opening for acts like Neil Young, Rufus Wainwright and Ryan Adams, it’s important to extend the opportunity to others.

“I really love to take out bands that we stand behind and that we’re friends with,” says Sara. “We wanna give [them] an opportunity to get what I think is a really open-minded audience.”

If new opening acts aren’t enough for those who saw them on previous U.S. dates, Sara explains that these shows will differ in several ways. For one thing, newer material has evolved over time, and likewise, older material will receive new treatment.

“We’re gonna play some old stuff,” she assures. “Like even older than the old stuff we usually play, which pains me, but I’m going to try to be a good sport about it.”

Then there’s the now infamous stage banter. In fact, an entire Web site has sprung up dedicated to Tegan and Sara chatter, the fan-fueled teganandsarabanter.com, which features their candid and often witty quips on topics ranging from their childhood to the recent vice-presidential debate.

“Sometimes when the music isn’t different, you can always count on us being different!” Sara laughs. The Con is currently available. Tegan and Sara will perform Oct. 16, 17, 18 and 19 at Henry Fonda Theater. For more information, visit teganandsara.com.