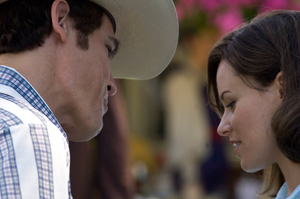 From the moment people heard Oliver Stone was tackling a George W. Bush biopic, conclusions were drawn, alongside battle lines. Arriving in theaters this week, W. is already shrouded in controversy, but the film isn’t a lampoon or caricature of our 43rd president, instead it’s a disarmingly funny and remarkably understanding portrayal of a man battling his own demons; it just so happens he’s also the leader of our nation.

Many audience members will be taken aback by Stone’s delicate caretaking of the Bush story, but that’s something everyone was committed to from the moment cameras rolled.

“I think the movie tries to understand him: the good, the bad and the ugly,” Stone says. “We try to make him a human being. I’ve said repeatedly I’ve tried to be fair, balanced and compassionate above all about this subject matter. Not to change sides and not to be my political self, which is my private citizen side. I’m a dramatist.”

Still, he understands the discomfort his film may inflict, despite immense effort to create an unbiased portrait.

“Frankly it’s very difficult to have a movie made on your life,” Stone admits. “It’s just the nature of our being.”

The film’s star, Josh Brolin, who is likely headed to an Oscar nomination for his portrayal of Bush Junior, contends they did their best to maintain creative equilibrium.

“We asked W. to be a technical advisor on the film,” Brolin says. “He declined.”

Elizabeth Banks, who plays Laura Bush, believes “what Oliver did is remind us that the office of the presidency, no matter who’s in it, is a really dramatic and difficult place to be. [Oliver’s] such a great student of American politics and realizes what a fascinating spot the leader of the free world is in. But we have to remember, [the president] is a man. His desk is incoming madness. Regardless of who’s in that office, it’s a crazy job. I think when you think about the office of the presidency and how difficult it would be and what any of us would be like in that spot, it’s very easy to sympathize with [W.].”

But Brolin had to do more than sympathize, he had to create a textured, believable, honest character that audiences, on either side of the political spectrum, could root for and care about.

“When Oliver first approached me, I thought ‘Why would you want to do a movie about that when you can watch this guy on CNN?’ I had a very cosmetic view of Bush … and Oliver, to be frank,” Brolin admits. “But once I read the script, I was amazed. Suddenly, after reading it and talking to Oliver, I’m looking up and saying, ‘This is the greatest challenge an actor could ever have. Can I live up to it?’ I springboarded from a lot of fear that I wouldn’t be able to pull it off.”

The preconception of the film by many and the Bush administration’s unwillingness to view it is something the filmmakers would like to see dissipate eventually.

“I hope [W.] would enjoy it someday and be wise enough to surrender to it,” Stone offers.

As for audiences, Stone is delighted to be shedding light on one of our nation’s most polarizing figures.

“A lot of this stuff will shock you,” he says. “You don’t know a lot about Bush. You think you know. Everyone has an opinion on the poor guy, but you don’t know much about him.” W. releases in theaters Oct. 17.

Interviews
The star of Oscar-nominated 'Flee' gives his first interview: 'I wanted my story to be seen'
1,048 views

Interviews
'Crazy Rich Asians' made Henry Golding a star. Now he's showing Hollywood everything he can do
737 views