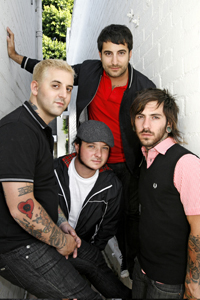 The last five years have seen Bayside quietly develop into one of the premiere punk bands around, riding the success of a handful of studio albums and non-stop touring. So when it came time to start record number four, Shudder, the band wasn’t looking to reinvent the wheel, but merely add to its already solid foundation.

“We just want to get better at being Bayside,” frontman Anthony Raneri says. “The way I would describe it is so many bands keep taking steps up, but then you start thinking way too much of yourself and you just miss that next step. Now all of a sudden you’re over here, and your fans are like, ‘Where did you go?’ You know what I mean? You can’t do that.”

Instead the band, which also features Nick Ghanbarian on bass, Jack O’Shea on guitar and Chris Guglielmo on drums, decided to hone its craft by incorporating more of the force on display in its live shows. At the same time, the members wanted to try out a few slight modifications as well.

“It’s not going to venture off too far to the left or right, but this album specifically has a lot of different moments where there’s different styles of music that we haven’t really ventured off into,” Ghanbarian says. “It still sounds like us, and it’s exciting for us – the energy and overall feeling of Bayside is still in those parts. It’s a great thing to be in a band that can do that.”

This is heard right off the bat in Shudder’s anthemic opener, “Boy,” and later on the surefire mosh pit starter “Roshambo (Rock, Paper, Scissors).” Lead single “No One Understands” is classic Bayside and one of the catchiest songs the group has written, while elsewhere the quartet is unafraid to stretch its wings on the soaring heights of “I Can’t Go On” and the acoustic “Moceanu.” In short, the album is sure to please Bayside fans and should have little trouble winning over new ones.

Meanwhile, the recording process was the most enjoyable of Bayside’s career. The band, which hails from New York, decided to record for the first time away from home, spending the summer holed up in Santa Monica’s newly constructed Red Bull Studios. Yet even though the group was given the longest time it has ever had to work on an album, the process probably turned out to be the shortest.

“I feel that we’ve always tried to work quick with every album, but something just rolled so much smoother out here,” Ghanbarian says. “Maybe it was the sun, I’m not sure, but we have so much space in the studio and everyone was just so prepared that the experience has been almost easy.”

“So much of the record is done in like two or three takes, so it was awesome to really keep that attitude,” Raneri adds. “We really wanted to have a very youthful, excited kind of energy in the record.”

Raneri hopes that spirit will last throughout the entire cycle for Shudder, which he believes to be the band’s strongest effort to date.

“We’ve all just been so positive and having such a great time making this record that I know that the next year and a half of touring on it and talking about it is going to keep us just as excited and just as happy as it was to write it and make it,” he says. “If we can put some of that excitement and happiness into the people that are listening to it, we’ve succeeded.” Shudder is currently available. Bayside will perform Oct. 23 at the Troubadour. For more information, visit myspace.com/bayside.