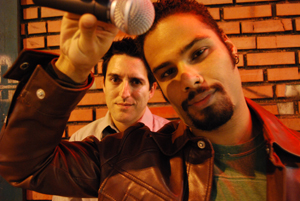 Log onto a recent Facebook chat between two-time HBO Def Poet Joe Hernandez-Kolski and internationally known beatboxer Joshua Silverstein of “So Fresh and So Clean.”

Joshua: So how about this show you’re in ...

Joshua: What has been your favorite part in doing this show?

Joe: Hmm ... I like the opening where we get into a huge argument.

Joshua: It’s not that huge.

Joshua: I like calling you a raciest! (and yes, yes she did.) Prick. You. Are.

Joshua: Someone who races more then anyone else. Racist. I like calling you a racist!

Joe: Oh! A racist! Yeah, I like that part when you call me a racist.

Joshua: I also like the part when I call you a @#$hole.

Joe: I don’t remember that part. Is that when you’re offstage?

Joe: I just looked at the “news feed” on the side ... I really don’t care that Brenda Varda’s left foot rhymes with rutabaga.

Joshua: Yeah, I feel you. Isabel Reyes just thanked someone for something.

Joe: So what the hell IS this show about?

Joshua: The exploration of the male relationship and the male ego.

Joshua: Yes, we give respect to the old comedy duos like the Smothers Brothers and Martin & Lewis.

Joe: Is there hip-hop in this show?

Joe: Raping? You may wanna use your spell check.

Joshua: All elements of hip-hop.

Joe: Since when did “raping” become a part of hip-hop?

Joshua: My culture gets raped.

Joshua: We should give the details.

Joe: In case they wanna see your culture get raped?

Joshua: And what did Stan Lathan say about the show?

Joshua: He said, “’So Fresh and So Clean’ is hilarious and outrageous, driven by provocative writing and strong performances. Joe and Josh are an amazing team. See this show!”

Joe: Did he really?