Samantha Maloney: The sexy drummer gives us “All Access.” 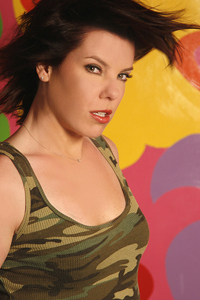 Famed drummer Samantha Maloney and frontman Maynard James Keenan aren’t performing among thousands of sweaty fans, chanting lyrics about having sex with Dolly Parton or driving away to Malibu. Both musicians sit together on a sunny afternoon at Caduceus Winery in Arizona.

As they savor red and white wines, Keenan, in a soft-spoken voice, chats with Maloney about Puscifer’s remix album V Is for Viagra. As the pair drives off into the desert highway, he reveals how music helped him discover “fantastic juices” at social events, making him a passionate wine connoisseur.

It’s one of the many intimate settings where Maloney introduces viewers to their favorite artists on “All Access,” a Web show on mainaTV.com where she investigates the secret lives of rock stars doing what they do best.

“I love going on the road and playing music to death, but it would be the death of me,” says Maloney.

Originally from Queens, N.Y., she received her first drum kit at age five, and by 22 she was performing in sold-out arenas for Courtney Love’s Hole. When the band went on hiatus in 2000, Maloney was offered the drum chair for Mötley Crüe. Since then, the veteran rock star has moved to Los Angeles, where she’s done everything from contributing music to film soundtracks, to acting in 2006’s Factory Girl starring Sienna Miller. Despite her success, it wasn’t enough.

“I wanted to hang out with bands and show people all the normal, everyday things they do when they’re not on stage,” she explains.

As a woman who’s seen it all, she was ready to show viewers what being in a band is really about.

Since the show’s debut in April, Maloney has been meeting music’s finest to discover the true story behind their talents. For the first episode, she joined the Crystal Method’s Ken Jordan and Scott Kirkland in their L.A. studio where viewers witnessed the trio jamming and sneaker shopping in Hollywood. In other episodes, she plays mini golf with Katy Perry, drinks absinthe with Marilyn Manson keyboardist Chris Vrenna and even shares a girls’ day out with Sia at New York City’s the SOHO Sanctuary Spa.

“I wanted to learn about new music which is hard to find because there aren‘t any outlets out there,” Maloney explains. “MTV is showing ‘The Hills,’ and I just heard that Lauren Conrad is making $75,000 per episode, which makes me want to throw up. There’s over a thousand genres out there that America is not being exposed to.”

To satisfy diverse tastes, “All Access” features “Stage 5” where bands, from the Donnas to the indie psychedelic group Darker My Love, perform exclusive tracks.

“My job is to bring our viewers the coolest, new music out there and run into bands that people want to get to know better,” says Maloney.

While she hesitates to reveal her favorite interview, she immediately gushes over chasing the waves of Southern California with retired pro surfer Timmy Curran, who shares his struggles in finding his voice in the music industry.

“I have plans to go sky diving soon with another musician, but I won’t say who,” she declares.

As Maloney unleashes more episodes of “All Access” and records music with the Ingenues, many still wonder whether she and Love will ever make a comeback.

“Courtney is someone that I do have a lot of love for. She gave me my first huge break,” she says. “If the time is right, it might be something interesting. You never know.”

In Maloney’s career, she was given the chance to become a basketball player and NYPD officer, but despite her father’s disappointment, she pursued music without looking back.

“I think it worked out well for me,” she says, laughing. “I’m getting to know myself not on the road and meeting those along the way who’re taking risks just to follow a dream.”