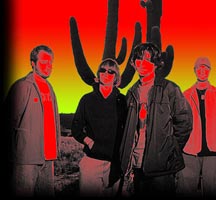 CKY is a band hell-bent to be in your face. Just like MTV’s Jackass which helped to put them on the map, they have a love/hate relationship with their past, and they seem to be aggressively trying to run away from the beast that spawned them.

Suffice it to say they were around long before Johnny Knoxville was playing Human Barbeque, but being labeled by many as "the Jackass band" feels a bit like they’re being burned by the hand that fed them.

This is probably why that, after a pair of by-the-numbers skate-rock releases, aptly titled Volume I and Volume II, CKY is here to Infiltrate…Destroy...Rebuild (their latest release from Interscope). However, the shadow of Jackass still looms over the band, and when I talk with drummer Jess Margera (brother of Jackass soldier-in-insanity Bam Margera), it’s three days after the big-screen version of the show has cleaned up at the box office, having taken in $23 million in its opening weekend.

Margera is phoning me from Denver on their stint on the Boom Boom Huck Jam action sports tour with Tony Hawk, and he is freezing his ass off. After a little small talk about Devo (who just departed the tour) and the fact that they still wear "the flower pots on their heads," Margera is anxious to talk about the creative process that helped spawn CKY’s new album.

"Deron [Miller] comes up with the guitar riffs and Chad [Ginsburg] works on the vocal melodies and stuff," he says. "I work with the rock beat and arrange the songs." Magera also notes how the band’s influences rear their heads to add ingredients to the Rebuild process. "Our influences are all over the place. It’s ridiculous. You would think [that] it would never work out."

"Deron is all about death metal, and [you’ll] notice the guitar riffs are much more busy than most rock records out there. I just take that and slow it down with a rock and roll beat to it and kind of make it more easy to digest for people. Chad is more into Ween and Mr. Bungle and Zappa, and I’m into Clutch and Zeppelin, and somehow they all come together."

While CKY is still drilling the asphalt grooves of their avid skate-rock listeners with the chillier "Attached at the Hip" and "Flesh into Gear," they do let up for some more somber stuff like "Close Yet Far" in hopes of getting onto mainstream radio.

"We wanted our album to be very versatile and we like it to go all over the place so each song has an identity of its own, which is lacking on a lot of rock records out there," states Magera. "Our mission is to bring interesting back into rock and roll, because if you turn on the radio right now, it’s pretty lame. Every band sounds the same and they all blend together."

Margera says that they’re counting on the CKY Alliance, their balls-out fan network, to help them crash them through the gates of what they call on their web site the "dissected and pretentious wasteland that is the music industry." Their new album’s title is a call to arms for both their fans and themselves to storm corporate rock’s battlements. "We want to infiltrate the staleness of rock right now and destroy it and rebuild it with originality, because there is a real lack of it right now."

Margera notes that there’s been some light at the end of the dark synthetic music tunnel in recent years courtesy acts like Queens of the Stone Age and Clutch, but hastens to add that "there aren’t enough bands following their own trends. That’s what we’re doing. We’re just doing rock the way we do it, and taking it into our own style, and people dig it."

Jackass label or not, these guys are determined to be different. Now it’s just up to radio and CD buyers to determine whether they’ll succeed or not.