The Bravery: Rock Heroes in the Making 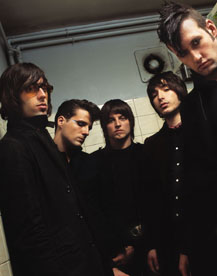 Sam Endicott, lead singer of The Bravery, will answer just about any question you ask him. But that doesn’t necessarily mean he’ll tell you the truth.

"We’re test pilots and lion tamers. Or, if there’s like a burning building and there’re people trapped in it, we’ll go and rescue them," says Endicott.

As one of this year’s newest "It" bands, The Bravery has been on most every music insider’s lips since they first emerged on the scene and signed with the UK’s Loog Records in 2003 and later with Island Records in the U.S.

Armed with an undeniable hip sound that’s part rock, dance and everything in between, the five stylish members are often described as sounding like a cross between The Cure and The Killers.

"We don’t think the comparisons are very accurate, but it’s just human nature – like when you hear something and you don’t know much about it, your immediate reaction is to compare it to things," says Endicott.

The New York-based band first started coming together when Endicott met John Conway (keyboards) at Vassar College. The two formed a friendship and started working together on amateur recording projects. Impressed with their sound, they decided to expand their band and found now-best friends Michael Zakarin (guitar) and Mike H (bass) through an ad in the paper. Anthony Burulcich (drums) was the last to join at the suggestion of a "random girl" that Endicott met one night.

Though the band is relatively unknown in MTV’s pop-saturated, "TRL" world, The Bravery has had great success abroad in the UK.

"The media there is more open-minded, which is for better and for worse. On the good side, they’re more open to it if a band is a little more different … They’re willing to embrace it that much quicker," says Endicott.

BBC News has already named the group the "Most Promising Act of 2005." Quite an impressive honor, considering the band’s early days of mixing tracks on an old, archaic computer.

"It was really low budget. I had this shitty iMac, not even a cool one, but an old red one. The equipment was whatever people left around the apartment," says Endicott. "We stuffed a mike in a shoe and put it on top of a Kleenex box – that’s how it miked the amp."

Calling his band’s sound a "hybrid of electronic dance music and garage music," Endicott says that he liked the idea of applying the theory of electro-clash to their music.

"It made me think, wouldn’t it be cool if you take what electro-clash is doing and then add to it a real organic rock band? I really like synthetic sounds and we like to celebrate that, but in the end, there’s nothing better than the visceral kick-in-the-face of a rock band," says Endicott.

Being involved in a rock band is something that the 20-something singer knew he wanted to pursue seriously after a brief stint working as a recruiter in an office of the U.S. Census Bureau.

"It helped me a lot in my music career. It taught me that an office job was not for me, and only the rock ’n’ roll thing would work," says Endicott.

Seeing them rock out in front of a packed crowd at a recent performance at Silver Lake’s Club Spaceland, it’s hard to imagine Endicott and his bandmates – who have a penchant for skinny pants, retro haircuts and eyeliner – belonging anywhere but on stage.

Jokingly, Endicott says that his band could very well be the next "Queer Eye" for a rock band. "As long as I can be Carson!" he adds.

The Bravery’s self-titled debut album releases March 29. The Bravery will be performing with Ash on March 26 and 27 at the Troubadour, in West Hollywood. For more information, visit www.thebravery.com