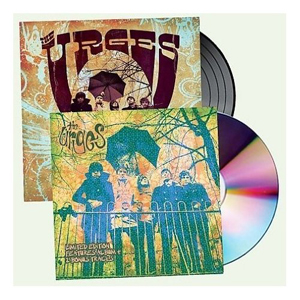 The Urges sound like they holed themselves up for months in some Dublin garage with a turntable and the Nuggets collection of ’60s punk, using it as some kind of Mel Bay method for playing rock ’n’ roll. And that’s what makes the Urges’ debut, Psych Ward, such a good record.

Whereas Clinic takes inspiration from the Seeds and the 13th Floor Elevators, the Urges actively channel them. This has happened before in the “neo-Paisley” scene of the mid-’80s, and even when punk stalwarts the Angry Samoans started to do the same thing in their latter days. But the Urges still seemingly come out of nowhere, mostly because they exude such a fresh and frenzied sound on record.

Their songs mine the territory pretty well of that-girl’s-got-me-all-wound-up (in good ways and bad), and less on the ethos of flower power. Psych Ward has enough Farfisa organ textures backing up banged-out guitar chords and the manic vocals of Jim Walters to satisfy those of us who were sometimes curious to hear a caffeinated version of the Lyres. Or else it satisfies those of us who crave regular viewings of Riot on Sunset Strip. It’s no matter, because the record is a testament to the timelessness of all that mop-topped proto-punk of 40-plus years past.