Flogging Molly: Revisits its Irish Roots with Within a Mile of Home 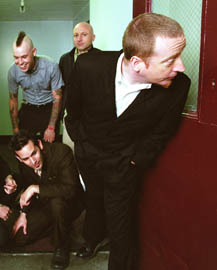 The quintessential holiday for drinking and debauchery also brings to mind four-leafed clovers and anything green. But what would St. Patrick’s Day be without genuine, Irish-influenced music like that of Flogging Molly’s? A band whose music was initially described as “too niche-y” or “too clique-y” and incapable of bridging “the gap between what people listen to and what it is,” Flogging Molly has defied genre conventions and built a serious fan base along the way.

Mandolin and banjo player Robert Schmidt says that it was their participation in the Van’s Warped Tour that proved the band’s “potential beyond the Irish or bar-going crowds.” Though Flogging Molly wasn’t being associated as a punk band at that time, the energy that they brought “stemmed from the excitement, honesty and directness of punk music.” During their first of four Warped Tours, the unique Irish-folk-punk band had to work hard to win over the crowds of 10,000.

“It was a million degrees and we got onstage wearing our suits. We had an accordion, mandolin and fiddle, and you knew that people were just about ready to walk away.”

But instead, audiences were captivated. Whether it was simply because of the novelty of the Irish influence in their sound, or if it was because of their dynamic live show, the band made an impression.

“It was one of those things where you slowly saw it start to catch on.” On the newest record, Within a Mile of Home, Flogging Molly continues to fuse ordinary, everyday, socio-political issues with esoteric topics more directly relevant to singer/songwriter Dave King’s background.

“When [Dave] sings about the troubles in Ireland, those experiences, energetically and politically, it can still be related to what we’re feeling now in America,” says Schmidt.

Even though many of the lyrics are personal to King, there are broad, overarching ideas that everybody can connect to.

Themes such as “the respect and love for one’s father; overcoming adversity; dealing with sorrow, sadness, death and loss; celebrating friendship, love and the good things in your life; being able to see that there is a light at the end of the tunnel regardless of how rough your day might be” are all recognized on the new album.

In addition to Schmidt and King, the seven-piece ensemble includes Bridget Regan on fiddle, Dennis Casey on electric guitar, Matt Hensley on accordion, Nate Maxwell on bass and George Schwindt on drums. Not only do the members fill up a stage when performing live, but they each bring something to the table when writing the music.

“The diversity of influences and the backgrounds of the band have worked to our advantage because they really stretch what we can do musically. It makes it more fun playing music because everybody in the band loves music, not just country or Irish or punk. Everybody has fairly open tastes across the spectrum; it’s fun to be able to bring all the things that you love about music into what you do.”

These days, the band and its astonishingly energetic live show are immediately coupled with St. Patrick’s Day and the Irish pub scene. “Being called a drinking band or an Irish band is a little bit limiting because that’s not really the thrust of what we are. We like a couple of beers here and there, and that “hi-diddly-day” Irish image is going to be hard for us to shake no matter what we do. St. Patrick’s Day is just a day that people directly relate to the music we play; but if it works for them, it works for us.”