By Shaunt and Levon Gharibian 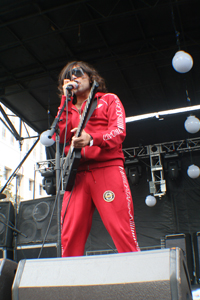 Thousands of eager hipsters and indie kids flocked to downtown for the third annual Detour Festival. Featuring 25 acts on four outdoor stages, the fest was spread across six city blocks around City Hall.

In matching red tracksuits, Norwegian band Datarock played an afternoon performance that delivered a stimulating jolt of energy to the crowd. The dance-punk group performed their hit “Fa-Fa-Fa” and closed the set with a saxophone solo, which served as quite a warm up for the rest of the evening.

Shana Halligan’s sensual alto paired with the ambient infusions of Bitter:Sweet provided a chilled-out vibe reminiscent of a cool martini bar. As dusk set, those that skipped the soulful, disco-inspired sound of Hercules and Love Affair probably could not help but wander into the large crowd at the Triforum Stage to catch headlining band Gogol Bordello. Call it gypsy; call it punk; the irrepressible, kooky, multi-ethnic music collective played an energizing two-hour set, incorporating a fiddler and an accordionist to accompany the animated vocals of frontman Eugene Hutz.

Genre-bending progressive rockers the Mars Volta closed off the night to the biggest crowd of the festival. As the group finished its set, the experimental progressions and intoxicating presentation of their compositions left the crowd in an aura of satisfaction.