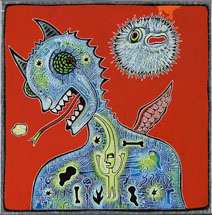 Joel Nakamura’s teratoids exist somewhere between the primitive spontaneity of Basquiat and paintings discovered on the crumbling walls of an antediluvian Sante Fe cavern. Medical dictionaries favor the less intrusive definitions of ‘malformed’ or ‘abnormal,’ but teratoid is also a cognoscente insult meaning monstrous.

No need to leave the kids home for this exhibit, however. Nakamura’s dinosaurs, Ultramen and skeletal monsters appear borrowed from a children’s book about Dia De Los Muertos in Japan. A flowered purple skull smiles as a medical heart on a spring bursts from its chest, its aortas pumping valentine hearts and posies from its own smiling flesh in Magnanimous Mojo.

Norimaki (assorted sushi) finds an intricately glyphed shark creature under a cherry tree reaching out to a bass head and tentacle on a square of rice. Adding to their luster is that all of his pieces are done with polymers and enamel on metallic sheets.

The artist says his own work is a blend of “folk art and sophisticated iconography … rendered in a neo-primitive technique,” though this unwraps images of modern primitives who actually frightened children with their Pinhead piercings last time I was in Venice. The blowfish in “Wasabi” wears his hundreds of piercings well, hovering above the horns of the devilish creature sticking out his tongue like a Tex Avery cartoon after consuming the glowing, pale-green humanoid representation of the Japanese horseradish. If only the actual substance went down as easily as Nakamura’s paintings.