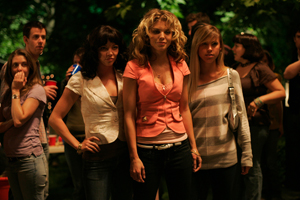 In the entertainment industry, change is inevitable. Now that Angelina Jolie has 80 kids and a fulfilling life traveling the world with Brad Pitt, Hollywood is ready for a new, complex but captivating screen goddess. The heiress to that throne is actress AnnaLynne McCord.

The 21-year-old bombshell rose to fame as the sultry but troubled vixen Eden, on FX’s “Nip/Tuck.” She can also be seen each week as Naomi on the latest iteration of “90210.” But perhaps her most challenging role to date has been her performance in the thriller, The Haunting of Molly Hartley.

In the title role is Haley Bennett (of Music and Lyrics fame). She plays a teen that begins to hear voices and see scary visions following her move to a new town.

McCord is Suzie, Molly’s rival. The two heat up the big screen opposite Chace Crawford (“Gossip Girl”) in this supernatural catfight. However, The Haunting of Molly Hartley almost took a different tone.

“I originally went out for the role of Molly,” admits McCord.

But for the filmmakers, it was her ability to play a convincing but well-rounded bad girl that changed all that.

“What I like to do in the roles that I get is get to the core of [the character’s] vulnerability,” she says.

Suzie certainly gives McCord ample opportunity to stretch her chops. Although most of the details of Molly Hartley’s plot are shrouded in secrecy (for your Halloween viewing pleasure), the actress does dish some cryptic details of her character’s progression.

“I like the aspect of where she starts off and how she ends up at the end of the film,” she says.

Apparently, things aren’t all they seem with Suzie, and the same can be said for the woman who plays her. McCord is a unique dichotomy of the exotic and the girl next door. Having grown up in the south (Georgia, to be exact), she is a far cry from the mega-bitches she brings to life artistically. Love of family peppers her every move.

“My two sisters are my world,” she explains. “They’re the reason why I do what I do.”

She also has a down-home work ethic and sense of gratitude that sometimes makes the accompanying shiny plastic world of TV and movies a bitter pill to swallow. McCord admits that she almost left the industry due to her disillusionment with it.

“I feel like we’re so lucky to be doing what we’re doing,” says McCord. “So quickly we lose sight of that. This is a blessing and not the way things should be.”

Instead of succumbing to the shallowness of some of her contemporaries, she has allowed her love of performing to prevail.

From a very early age, McCord knew that she wanted to be an actress.

“I learned Shakespeare word-for-word. My parents were like, ‘Oh My God! There she goes again!’” she says, laughing.

McCord stuck with it, and has worked successfully ever since. Roles in the upcoming comedy Fired Up (where she will play a cheerleader) as well as her lauded small screen endeavors have been great. But she is still anxious for the chance to move into the one genre that she has yet to crack: the action flick.

Just like Jolie, McCord is an adrenaline junkie with a love of big guns, explosions and good versus evil. She even names Wanted as one of her favorite Jolie projects.

“Entertainers have the power to totally evoke emotion out of people,” explains McCord.

If what she says is true, then this is one actress whose career will have the world in a state of excited bliss for years to come.

The Haunting of Molly Hartley releases in theaters Oct. 31.